Part of International Effort to Distribute One Million Backpacks 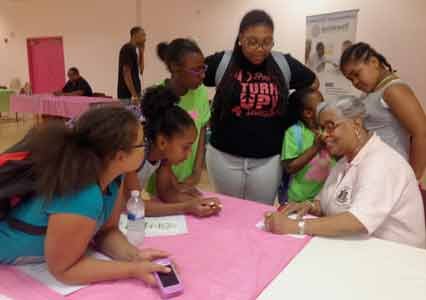 More than 300 Baltimore youth will be heading back to school with backpacks and school supplies thanks to the Epsilon Omega Foundation, Inc. and Epsilon Omega Chapter of Alpha Kappa Alpha (AKA) Sorority. Members of the sorority distributed the items on Friday, August 14, 2015 during their Back-To-School Community Fair held at the Ivy Family Support Center on Dolfield Avenue. In addition to school supplies, the family-oriented event also featured food, snacks, Photo ID and Finger Printing.

The effort was part of the 2014-2018 International Alpha Kappa Alpha Program “Launching New Dimensions of Service.” E. Francine Stokes McElveen is the president of Epsilon Omega Chapter. Frances Parks is the chair of the Education Committee of Epsilon Omega Chapter, whose goal has been the implementation of Target 1: The AKA One Million Backpacks and Educational Enrichment. The effort engages the sorority’s signature youth program ASCEND (Achievement, Self-Awareness, Communication, Enrichment, Networking and Developmental Skills).

The One Million Backpacks effort is a part of the Educational Enrichment component of ASCEND, and focuses on the sorority’s ability to support education with resources in the form of backpacks loaded with school supplies for students K-12. The project has been led by Chair Sharon Smith along with committee members Bettye Adams; Dorothy Coleman; Claudette Egerton-Swain; Barbara Howard; and Evelyn McKesson.

“The whole idea was to come in and share information with the community and to give supplies to the kids,” said Smith. “We wanted to collaborate with the community. We also wanted children to have the supplies they need when they go back to school. It’s outreach to the community to let them know we are here for them and want to give back.”

In order to fill the backpacks, the committee involved chapter members in a three-month Epsilon Omega Sisters Yours Group Challenge. During the March to June span, school supplies were collected as part of the challenge, with the group collecting the most items being declared the winners. As a result, 300 backpacks packed with school supplies were distributed at the Back-to-School Community Fair.

“This the second year the sorority has given out back packs and supplies,” said Smith. “This effort is a collaboration between the chapter and the foundation. The event was a great success. People kept coming. There is a need, and we want to help fill that need.”

Taqi Robinson, a student at Frostburg State University, and a member of Kappa Alpha Psi Fraternity, donated paper, rulers, and other supplies for the event.

“I live around the corner,” said Robinson. “I saw the flyer and wanted to help. I had a few supplies and wanted to donate them. It was my random act of kindness for today, and a part of my community service.”

“I do a lot of community service,” said Nicole Gray, director of Security & Compliance for Inovolon. “The youth of Baltimore are our future. I am a big technologist, and as we transition into the technology age, we should equip our youth. I would like to see youth get to learn as much as they can about technology so that they can innovate and be the next technologist of the future.”

Cory Milam, who says she is a big supporter of STEM (Science, Technology, Engineering, and Mathematics), donated 100 protractors.

“I collected the protractors,” said Milam. “They were able to come here and get a backpack along with many other school supplies. This was an awesome event.”