Children should be vaccinated to protect health and prevent classroom outbreaks 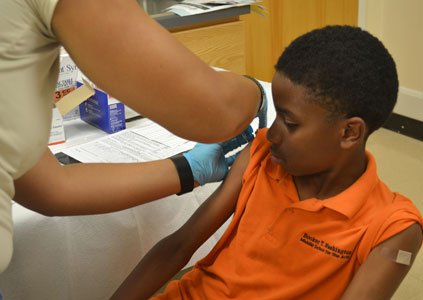 August is National Immunization Awareness Month and the prefect time for parents to ensure that their children’s— and their own— immunizations are up to date, before students and germs gather in the classroom. Vaccine-preventable diseases once thought to be well controlled including: measles and pertussis (whooping cough), still occur in America. Last winter’s multi-state outbreak of measles that began in a California amusement park sickened more than 170 people, most of whom were unvaccinated.

Measles can be serious. As many as one out of every 20 children with measles gets pneumonia, the most common cause of death from measles in young children. According to the Centers for Disease Control and Prevention (CDC), since measles was declared eliminated from the U.S. in 2000, the annual number of people reported to have the disease ranged from a low of 37 people in 2004 to a high of 668 people in 2014. Earlier this year, the District of Columbia Department of Health confirmed one case of measles.

Pertussis outbreaks have also been affecting children. More than 28,000 cases of this highly contagious disease were reported last year in the U.S., many in school-age children. Infected children can develop a severe cough that lasts for weeks or even months. They can also pass pertussis onto unvaccinated infant siblings, who face the greatest risk of serious illness and death. The March of Dimes joins the CDC in recommending that pregnant women, family members and caretakers also be vaccinated to protect infants, especially those too young or too vulnerable – such as those born prematurely – to get their own immunizations.

The March of Dimes has a long history of supporting vaccines. The organization was founded in 1938 by President Franklin Delano Roosevelt, himself a polio survivor, to combat polio. At the time, polio was an epidemic disease that paralyzed or killed up to 52,000 Americans, mostly children, every year. The March of Dimes funded the development of the first safe and effective polio vaccine by Dr. Jonas Salk in 1955, followed by the oral vaccine developed by Dr. Albert Sabin in 1962. Nearly every baby born today receives a lifesaving polio vaccine.

Since 2009, the March of Dimes has been working with Sanofi Pasteur to help inform the public about the burden of infectious disease and the value of vaccines through two unique campaigns: Sounds of Pertussis® and Word of Mom: Celebrating Generations of Healthy Advice. To view the public service announcement and find resources and tools to raise awareness about the importance of vaccinations for the whole family, visit www.Vaccines.com/WordofMom or www.vaccines.com.

The March of Dimes fully supports school immunization requirements and advocates against non-medical exemptions to vaccination. More information on childhood vaccines is available at: www.marchofdimes.org/baby/your-babys-vaccinations.aspx.