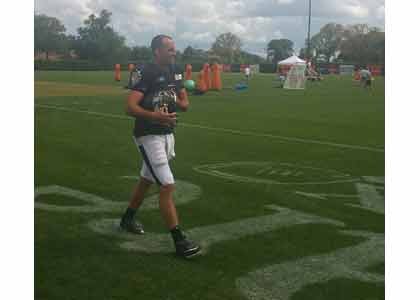 Baltimore Ravens backup quarterback Matt Schaub walks on to the practice field for joint practices with the Philadelphia Eagles at the NovaCare Complex in Philadelphia, Pennsylvania. (Photo: Turron Davenport)

Joint practices with the Philadelphia Eagles gave Baltimore Ravens backup quarterback Matt Schaub a chance to go home. Schaub was born in Pittsburgh but went to school at West Chester East High School, which is just over 30 minutes west of Philadelphia.

Schaub started his NFL career with the Atlanta Falcons after being drafted in the third round (90th overall) in the 2004 NFL Draft. Ironically, Schaub’s final game as a Falcon came against the Eagles in 2006.

Schaub was happy to be able to see some of his family after practice and got a rare opportunity to be back in the Philadelphia area.

The Ravens play the Eagles at Lincoln Financial Field in Philadelphia on Saturday, August 22, 2015. The ticket requests have been rolling in for Schaub since he is going to be playing close to his hometown. He says that a number of friends and family are trying to figure out their plans, but he fully expects to have a bunch of family at the game.

Saturday’s game could be a trial run for the quarterback who has spent the bulk of his time far away from home. Playing for the Ravens will afford Schaub’s family the opportunity to see him play more often since Baltimore is about a two-hour drive from West Chester.

Schaub was a letterman in football, basketball and baseball. He went on to attend the University of Virginia, where he graduated with a degree in Economics.

He was traded to the Houston Texans in 2007 and was very successful there. Schaub put up MVP type numbers in Houston but his most significant achievement was the “GR8HOPE” foundation.

The “GR8HOPE” foundation was founded in 2011 by Schaub with his wife Laurie, a former cheerleader for the Atlanta Falcons and states: “With a passion for helping others in need, the foundation strives to provide; lasting improvements to help bring healing to children with medical needs, hope for our future generations, and happiness to the children and their families enduring medical challenges,” as its mission statement.

To learn more about the foundation, go to http://www.gr8hopefoundation.com/gr8hope/.

Recently, much attention was given to comments directed at Matt Schaub by Terrell Suggs. Suggs ribbed Schaub for throwing a few interceptions. He pointed out the color jerseys the offense wore as if Schaub was somehow confused who he was supposed to throw the ball to. Some have made it out to be a rift between the two veteran players. However, Schaub dismissed the comments and says that he is not affected by them.

He is excited about the opportunity to see a new opponent on the other side of the ball during practice.

“It’s great for everyone. Going against a different team is great for every position. You get to test your skills against guys other than your own that you work against every day. Those guys know you, they know you’re scheme,” Schaub said. “Facing someone else, you get to really see where you are and where your team is at. You get to see where you are as a player when you go against guys that don’t really know your tips and tendencies. It’s neat to go out here, see where we are and compete against different faces.”