On voting... and not 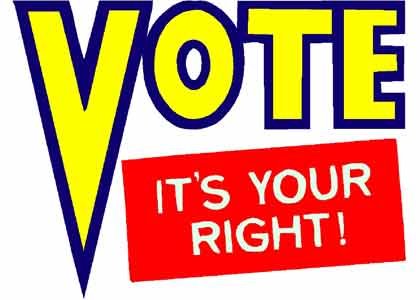 The campaigning for next year’s elections is starting to draw more attention, and with it comes a focus on voters and their mood. Which is all well and good, but it leaves out of the equation one large bloc of citizens— people who are eligible to vote, but don’t. Over the years, a fair number of people I’ve encountered have confessed that they do not vote— and I often surprise them by pressing them on why they don’t. They give a multitude of reasons.

The most common is that they’re too busy, or that voting takes too much time. Plenty also say they’re turned off by politics, politicians, and anything having to do with government. “What difference does it make?” they’ll ask. Or they’ll argue that money has so corrupted the political system that they want no part of it.

There are also legitimate reasons: people are ill or disabled, they didn’t know where to vote or their polling place was hard to reach. Sometimes they didn’t meet their state’s registration deadline— which might be a month ahead of the election— or they ran into ID requirements that stymied them. On the whole, it didn’t take much to keep them away from the polling place.

Which, for many policy-makers, is of little concern. Some don’t worry about low voter turnout; they’re more focused on making sure voters are informed. Others are pushing to make it more difficult for eligible voters to vote, since their chief concern is to protect the integrity of the ballot and reduce fraud.

Still, plenty are deeply concerned about falling rates of voter participation— the 2014 elections saw the lowest turnout rate since 1942, according to the United States Election Project, which found that a mere 35.9 percent of the voting-eligible population cast ballots. They’re concerned because voting doesn’t just put office-holders in place and push policy in one direction or another. It also affirms the electoral system. When people don’t vote, they undermine the legitimacy and effectiveness of our representative Democracy. The vigor of our system depends on the vote of each citizen. So what do we do about it?

My first recommendation is actually a note of caution. Generally speaking, Democrats have emphasized making ballot access easier; Republicans have focused on ballot integrity. Both need to be addressed if we’re to build the legislative support necessary to achieve needed changes in our electoral system. We have to make it easier to vote and harder to cheat.

We need to modernize the system. Democracies like Australia and Canada invest

serious money in their election infrastructure and conduct widely acclaimed elections. Ours, by contrast, is fragile and uneven. We’ve already had one presidential election decided by courts on a question of failed infrastructure. More embarrassing cases will certainly occur. The aim of reforming the system is to make voting convenient, efficient, and pleasant, to make sure the mechanics work as they ought, and to ensure that disputes are handled fairly. This means that state governments, not localities, should be responsible for the accuracy and quality of voter lists and for educating the public about voting. Often, local governments have neither the expertise nor the funds to do this effectively.

Finally, there is the question of voter ID. It’s legitimate to ensure that a person presenting himself or herself at the voting site is the same one named on the voting list. But requiring an ID needs to be accompanied by aggressive efforts to find voters and provide free access to the voting booth. Instead, a lot of states that have instituted ID requirements have dismissed the idea that this imposes a responsibility to reach out to voters and make IDs available to those who can’t afford it. They’re subverting representative democracy.

Lee Hamilton is Director of the Center on Congress at Indiana University; Distinguished Scholar, IU School of Global and International Studies; and Professor of Practice, IU School of Public and Environmental Affairs. He was a member of the U.S. House of Representatives for 34 years.