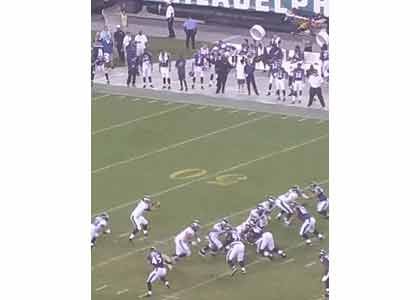 Eagles quarterback Mark Sanchez and the offense executes a play against the Baltimore Ravens defense in week two of the preseason at Lincoln Financial Field in Philadelphia, PA. (Photo: Turron Davenport)

PHILADELPHIA — The Baltimore Ravens and Philadelphia Eagles participated in joint-practices and capped off the week with a preseason game on Saturday. A lot was made about the tempo of the Eagles offense. Chip Kelly and John Harbaugh exchanged practice itineraries when they planned out the joint sessions.

None of the three practices compared to the pace that the Eagles offense executed on game day. The Ravens defense seemed to be caught off guard by the no huddle, fast tempo offense that was led by Sam Bradford in his Philadelphia debut. The Eagles marched 84 yards in 3:55 and scored a touchdown on their first drive. Coach Harbaugh said that the team didn’t game plan for the fast break style offense and that was done on purpose. The lopsided final score of 40-17 showed that Harbaugh was speaking the truth.

“I told the team that we will learn from this. It was a game that we didn’t game plan for and obviously we will learn from that. The tempo of the offense was tough. We didn’t prepare for it by design,” Harbaugh said. “There’s no way that we are going to game plan the second preseason game when we are still doing our own install and trying to develop guys.”

Harbaugh also said that the phones were out for the whole first half which didn’t allow the coaches to get any calls onto the field. That resulted in Ravens defenders being out of position and giving up big plays.

The Ravens were penalized 17 times for 139 yards. It was a sloppy game in all three phases. The Ravens gave up a 68 yard punt return by Kenjon Barner for a touchdown. Terrell Suggs said that they will be able to learn from this game because few teams execute the fast paced offense as well as the Eagles. The Ravens open up the season in Denver against the Broncos and will have to go against spread teams such as the New England Patriots if they advance to the post season.

Many Ravens defensive players look back on the game as a chance to learn. C.J. Mosley saw it as a chance to prepare for later on. “It was a test that may happen again later down the road so we have to adapt to it. At the end of the day, it’s on us to stop the offense,” Mosley said. “They’re a fast paced team and no huddle team so we have to communicate out there. It’s something we had to adjust and fix.”

As safeties, Will Hill and Kendrick Lewis are responsible for getting the secondary set up. Hill liked getting the chance to compete against the Eagles and said it was a challenge. He said they weren’t surprised by the fast tempo and that even if they did game plan for the offense, he wouldn’t know how to do so. “I welcome the challenge. We as a unit have to help each other against a fast offense,” Hill said. “It was difficult just to get anybody lined up out there. It didn’t surprise me. We knew they had a fast offense. We just didn’t game plan for it. I don’t even know how you could game plan for it. We just ran our basic defense.”

Brandon Williams found his own silver lining. He said that the game showed them who is going to fight and keep going until the end. Things will get ugly sometimes but the tough teams fight through the adversity. A game like this gives a team a chance to learn how to persevere. Williams said that fatigue will come in these kinds of situations but offered up a solution. “You have to fall back to training and fundamentals. When you’re out there tired, you have to maintain alignment and assignment along with technique,” Williams said. “I feel like we just need to use this as a learning tool to get better.”

The Ravens will have a week to reflect on this game and get ready to face the Washington Redskins at home in the third preseason game; a dress rehearsal for the starters. It’s the last time they will be in action so they will want to rebound in a strong way.