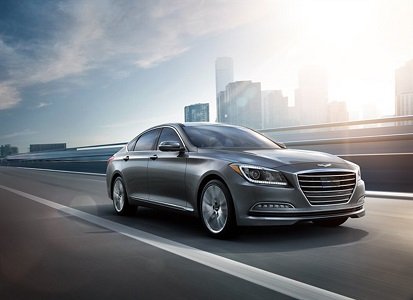 (NNPA) — You can call something a luxury car, but if the interior doesn’t feel or look like a luxury car, then you have a tough sell ahead. The first thing we noticed about the Genesis interior was the wood. There was a broad swath of matte-finished wood across the face of the dash and it had a natural grain look and feel. It continued through the doors fore and aft.

There was a TFT screen between a three dimensional odometer and speedometer. The touch screen was pretty wide but not so big as to overpower the wood finish. Inside trim included aluminum, chrome and upscale polymers.

And the car was quiet, really quiet – with the engine on or engine off. We had the Genesis 3.8. AWD. That means our test car had a 3.8-liter direct injection V6 that made 311 horsepower and 293 pound-feet of torque. It was mated to an eight-speed transmission. This powertrain was smooth, quiet and assertive.

Hyundai said, “This system has a wider range of torque distribution variability than many competitive systems and has been tuned to variable conditions such as straight-line acceleration, medium- and high-speed cornering, and hill-starts.”

Putting power to all four wheels is great for slippery roads. But it also contributes to effective handling on dry pavement. And the 2015 Hyundai Genesis stuck to the pavement. Turns were sharp, cornering was crisp and the car accelerated with authority, once reaching 95 mph from 75 mph in roughly two seconds.

High strength steel was used extensively on the platform of the new Genesis. The result was 16 percent stiffer torsional rigidity and 40 percent stiffer bending rigidity compared to the first Genesis. That may sound too technical. but the bottom line is it was a smoother ride with hardly any noise, vibration or harshness.

We went over a stretch of road, Outer Drive between Wyoming and Livernois, which was ruddy surfaced and pock marked from one street to the other. There were no squeaks or rattles, the 2015 Genesis was quiet, even the thumps and bumps of the suspension were muffled.

Hyundai said the Genesis is the first model to use the company’s Fluidic Sculpture 2.0, yes there was a 1.0. The swerves and curves of the first generation have been reduced. Thus, the design can be incorporated into more Hyundai models. The Korean automaker needs to find a familial exterior style for its vehicles.

The Genesis had a distinctive hexagonal grille and a crease accent line running along the flanks of the car. It had a long snout and short rump with a longer wheelbase and shorter overhangs than the car that it replaced. This car looked like it could run – fast.

Our test vehicle was loaded. It had a 12-way front power seat. The driver’s chair had power bolsters and a seat cushion extension. The front seats were heated and cooled while the rear seats were heated. Our beige perforated leather seats had black piping.