Sleeping with contact lenses could lead to vision loss 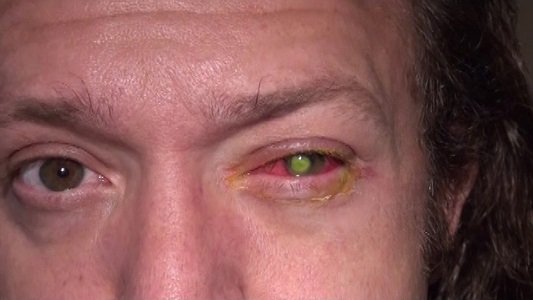 (CNN) — Chad Groeschen was working on an outdoor deck for a client a few weeks ago when his left eye started itching. He chalked it up to allergies at first, and then to a sinus infection after his eye got goopy and he could not see out of it. He had no idea his contact lenses were the problem.

Doctors at Cincinnati Eye Institute diagnosed Groeschen with a bacterial infection that was quickly destroying his cornea, the eye's protective outer layer. "It was basically that if I hadn't had contacts [the bacteria] might not have incubated," said Groeschen, a 39-year-old builder and sculptor in Cincinnati.

Groeschen had been using extended wear contact lenses, and only taking them out every week to clean. Even though these lenses are approved by the U.S. Food and Drug Administration for overnight wear, the American Academy of Ophthalmology warns that this type of use increases the risk of infection.

Groeschen is one of many Americans who use contacts in ways that could jeopardize their eyes. A new report by the Centers for Disease Control and Prevention found that, among the 41 million adults in the United States who wear contacts, 99% of them wear, wash or store their lenses in unhygienic ways.

The most common mistakes were sleeping or napping in contacts, which 50% and 87% of wearers were guilty of. Other mistakes that people reported were failing to replace contacts (50%) and cases (82%) as often as recommended; showering with their lenses in, which can allow bacteria from the water to get onto the lenses (85%); keeping old contact lens solution in the case, which loses its disinfecting power, and just topping it off with fresh solution (55%).

"Individuals are likely doing at least one, if not more, of these behaviors," said Dr. Jennifer R. Cope, medical epidemiologist at the CDC and lead author of the report.

Committing more than one of these unhygienic acts can probably further increase a person's risk of infection.

"We think that there's an event where maybe you seed the contact lens or your case with one of the microorganisms that can cause infection and then subsequent behavior can allow that to amplify so it's causing an infection," Cope said. Showering in lenses or not replacing contact lens solution could seed the bugs, then wearing lenses for too long could allow them to amplify, she added.

The report found that one third of contact lens wearers have had to go to the doctor at some point because of redness or pain in their eye.