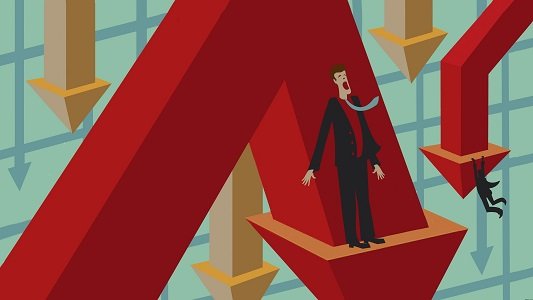 HONG KONG (CNNMoney) — China's stock markets are suffering from massive volatility and investors are running scared. If you're just catching up to it, here's what you need to know. Last updated: August 26, 03:10 am ET (07:10 am GMT).

1) China stocks declined for a fifth straight day on Wednesday as investors reacted to the central government's decision to cut interest rates and allow banks to lend more.

2) The stimulus measures were announced shortly after the benchmark Shanghai Composite index closed down 7.6% on Tuesday. That followed a massive 8.5% tumble on Monday, the worst one-day drop since February 2007.

3) The sharp declines are terrible news for officials in Beijing, who had been trying desperately to support stocks.

4) The root cause of all the turmoil: Over the past year, investors poured more and more into Chinese stocks, even though economic growth and company profits were weak.

5) Retail investors -- think mom and pop, average folks -- were the most enthusiastic. A classic bubble developed.

6) The bubble popped on June 12, and the Shanghai index lost about a third of its value before rebounding. Losses were even more dramatic on the smaller Shenzhen Composite.

7) China moved aggressively to control the crisis. The government gave money to brokerages to buy stocks -- and ordered company executives not to sell their shares. New company listings were suspended. The central bank cut interest rates to a record low.

8) Regulators and security officials launched an investigation into illegal short selling -- borrowing stocks so you can trade them in the hope they fall -- and rumor mongering. Only approved brokers are allowed to engage in short selling in China.

9) For a while, Beijing's plan appeared to work, but the Shanghai Composite has resumed its decline. The index has dropped more than 42% from its June 12 peak, erasing all gains year to date.

10) Foreigners own just 1.5% of Chinese shares, so your portfolio is unlikely to be directly affected. Still, economists are worried that stock losses will ripple through China's economy, and take a bite out of consumer spending. Gold, copper and other commodity prices have been affected.

11) The government's goal is to minimize damage to the real economy, and Beijing still has policy tools it can use to support growth. The central bank has cut interest rates and lowered the amount banks are required to keep on reserve, making it cheaper to take out loans and easier for banks to lend. Other options include boosting infrastructure spending and slashing taxes.

13) Investors around the world are now reacting to the threat posed by an economic slowdown in China. A 442-point surge for the Dow vanished at the end of the trading session Tuesday, the latest sign of how anxious markets have become about the health of the global economy.