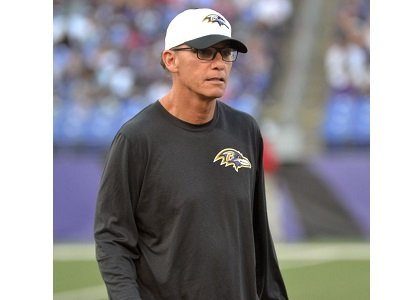 The competition at wide receiver has been a focal point of the Baltimore Ravens throughout training camp. The team has one proven veteran in Steve Smith while the rest of the receivers on the roster don’t possess an abundance of experience. Offensive Coordinator Marc Trestman requires the receivers to know all of the positions; X, Z and the slot. Trestman refers to getting reps at all receiver positions as “cross training.”

Trestman said that all of the receivers are trying to “build a resume.” He feels that they can do so if they play on all sides meaning inside, outside and the slot. Cross training gives the receivers more opportunities to get reps because it allows them to be interchangeable and not get pigeonholed into particular packages.

The slot position is one that typically utilizes a compact, shifty and sure handed receiver. The Ravens have guys like that on the roster in Michael Campanaro, DeAndre Carter and Tom Nelson. However, Trestman has been known to employ larger receivers in the slot such as Marlon Brown, Jeremy Butler and Darren Waller. Trestman said that having bigger receivers in the slot gives the offense an advantage.

“I think that you try to utilize the skill set – the size – the skill set of the guys that you have and work routes and scheme that you can work with those guys in those areas. We just try to maximize their strengths that they have in that area,” Trestman said. “There’s going to be a size matchup that we’re going to try to take advantage of. A lot of times you’re on the third corner – the nickel – and you have the opportunity to play against a guy who isn’t playing every down. And again, the size is a factor; it’s a benefit.”

The larger receivers obviously give the quarterbacks a nice target on the outside as well. That’s especially the case with throws down the field. They can use their big frames to box out defenders along the boundary as well as on the post.

Some thought that the vertical game would suffer when rookie receiver Breshad Perriman went down early in camp. Trestman acknowledged that Perriman’s speed was one of the reasons that they drafted him, but pointed out that they have hit a good amount of deep passes in training camp. Being a vertical threat isn’t all about speed however. This is something that Trestman has considered as he dialed up some deep pass attempts in practice and games.

“You don’t have to go by your guy to beat him. The guy can be on top of you, and you can back-shoulder throw. That’s a vertical throw, too, and we [had] a bunch of that in the games, in the practices anyways,” Trestman said. “We got one by Marlon [Brown] in the game. We have enough speed to get downfield. It’s [about] how we do it and how we scheme it and approach it. Our guys are fast enough.”

Having a veteran like Steve Smith helps provide fuel for the receiver group to compete. Smith is entering his last season in the NFL but welcomes the opportunity to line up in the slot. It’s a rugged area were receivers have to risk their body going across the middle. He challenges all of the receivers to go out and dominate defensive backs.

The drive and competitive spirit has allowed rookies such as Darren Waller and Daniel Brown to accelerate their growth in the offense. Both of the big, young receivers put in the work that is necessary to improve their level of play. Aiken, a former journeyman, is working to be the starter opposite of Smith. Waller, Brown and Jeremy Butler are fighting for reps at the power slot position. Campanaro, Aldrick Robinson, Carter, Tom Nelson and Trent Steelman give the Ravens a group of smaller receivers that can win on the outside.