Amelia Boynton remembered as the 'Rosa Parks' of Selma Movement 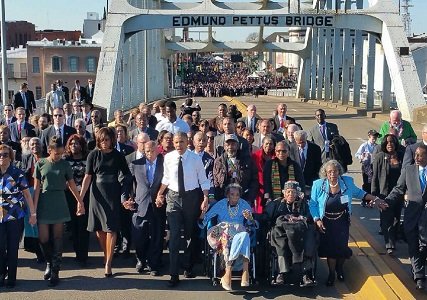 Boynton, in wheelchair next to President Obama, at 50th anniversary celebration of the Selma to Montgomery March. (Photo: Stephonia Taylor McLinn)

WASHINGTON (NNPA) — Amelia Boynton Robinson, who died Wednesday in Montgomery, Ala. at the age of 104, is being praised as the ‘Rosa Parks’ of the Selma voting rights movement.

Mrs. Boynton, as she was known throughout the movement, had been hospitalized since suffering a stroke in July. She was a courageous voting rights crusader who was brutally beaten on “Bloody Sunday” on the Edmund Pettus Bridge, the first leg of the Selma to Montgomery, Ala. March that provided the impetus for passage of the landmark Voting Rights Act of 1965, which was signed into law by President Lyndon B. Johnson.

“Dr. Boynton was the straw that stirred the drink. She was a major catalyst in the Selma to the Montgomery march,” said Charles Steele, Jr., president and CEO of SCLC, the organization co-founded by Dr. King. “She helped start and more importantly, bring attention to ‘Bloody Sunday’ and her strength, courage and tenacity helped make Selma the historical icon that we know today. Dr. Boynton was to Selma what Rosa Parks was to Montgomery,” a reference to the African American seamstress whose refusal to give up her seat to a White patron ignited the 1955 Montgomery, Ala. Bus Boycott that propelled King to national fame.

President Barack Obama, who was with the wheelchair-bound Boynton in March to commemorate the 50th anniversary of the Selma to Montgomery March, also praised the civil rights warrior.

“Fifty years ago, she marched in Selma, and the quiet heroism of those marchers helped pave the way for the landmark Voting Rights Act,” he said in a statement. “But for the rest of her life, she kept marching – to make sure the law was upheld, and barriers to the polls torn down. And America is so fortunate she did.”

Obama added, “To honor the legacy of an American hero like Amelia Boynton requires only that we follow her example – that all of us fight to protect everyone’s right to vote.”

Rep. John Lewis (D-Ga.), whose skull was cracked in Selma on “Bloody Sunday,” said: “This nation has lost a crusader, a warrior, and a fighter for justice. She was one of the most dependable, reliable leaders to stand up for the right to vote in Selma, Alabama and in the American South.”

He continued, “Amelia Boynton was fearless in the face of brutal injustice, willing to risk all she had on the frontlines of change in America. She was arrested, shoved and pushed in front of the Dallas County courthouse by sheriff Jim Clark. She was knocked down on Bloody Sunday on March 7, 1965, on the Edmund Pettus Bridge as 600 of us attempted to march to Montgomery to dramatize the dire need for voting rights legislation in this country.”