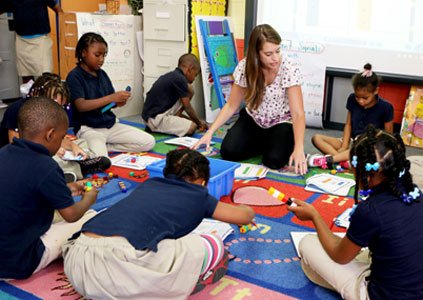 In the classroom of an Urban Teachers participant. (Courtesy Photo)

BALTIMORE — The new partnership between Urban Teachers and Johns Hopkins University is a game changer for the teaching profession and Baltimore area schools seeking more diverse and even better trained candidates, according to those involved in the new seven-year agreement.

The Johns Hopkins University School of Education, the top ranked institution of its kind in the country, and Urban Teachers, a heavily lauded and rigorous alternative teacher certification program, have formed a seven-year partnership to train teachers for public schools.

“It really is a game changer,” said Jennifer Green, the CEO of Urban Teachers.

“We have been working in Baltimore City for the past six years and we’re starting to see real results from our teachers. This partnership helps us to team with the number one school of education in the country.”

Formerly called the Urban Teacher Center, Urban Teachers was founded in 2009 to solve a critical challenge in urban education— new teacher quality. The organization built a “break-the-mold” teacher preparation program from the ground up to ensure every teacher would get the experiences and support they need to produce results with students.

They began in two of the highest-need districts in the nation, Baltimore and Washington, D.C. and since 2010, they’ve welcomed more than 500 aspiring teachers for district and charter schools in both cities, Green said.

“We think we have a real shot at 200 new teachers per year and, since we’ve announced the partnership, we have three times the applicants we had at this point last year,” she said. “If those numbers increase— and we think it’s a real possibility— we’ll see about 100 new teachers next year and certainly the local school districts have a need for that so the demand is there.”

For the current school year, Urban Teachers participants and alumni will reach more than 15,000 students, including 5,900 in Baltimore. They’ve also welcomed 206 residents in Baltimore and Urban Teachers, of whom 51 percent are individuals of color, will teach this school year in 40 Baltimore schools

For it s part, Hopkins said it has built the partnership to expand the number of well-trained, career teachers to enter into urban Baltimore classrooms and national low-income schools.

“The Johns Hopkins University has been a leader in producing both top-notch doctors and teachers,” David W. Andrews, dean of the Johns Hopkins School of Education, said in a statement. “We’re thrilled with the partnership with Urban Teachers. It will produce more excellent educators who are prepared to handle any obstacles they face from their first day in the classroom.”

The collaboration will directly benefit urban schools throughout the United States, including Baltimore City where, 84 percent of students are considered to be low-income and only 12 percent of fourth graders are performing at or above the proficient level in math, according to the National Assessment of Educational Progress.

Also, just 11 percent are considered at or above proficient in reading.

The partnership will prepare an increased number of high-performing, committed teachers who are ready and able to improve the outcomes of thousands of students in urban settings who are in need of a great education, Green said.

It will provide an opportunity for aspiring teachers who enter the program to receive a Master of Science in Education with a concentration in educational studies that equips them to teach in urban environments and it will offer new teachers training in general and special education, equipping them to meet the needs of all learners.

All graduate coursework is clinically based, allowing for teachers to practice their skills immediately in the classroom.

“To ensure they are ready for the job, the program will provide candidates with a yearlong residency to practice effective teaching techniques before becoming responsible for their own classroom,” Green said. “We are excited to be partnering with the top-ranked graduate school of education in the country to provide new teachers with the training needed to help students learn and succeed.”