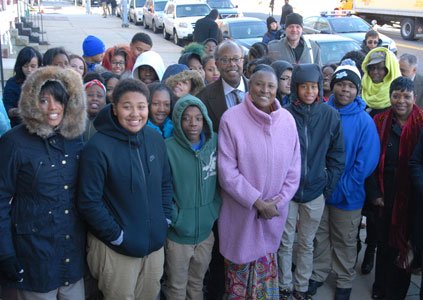 Mayor Stephanie Rawlings-Blake and other officials joined Dr. Joanne Martin on Monday, November 23, 2015 as deconstruction work began on a number of properties surrounding The National Great Blacks in Wax Museum in the 1600 block of East North Avenue in Baltimore. (Photo; Gar Roberts)

BALTIMORE — Already among the country’s most dynamic cultural and educational institutions, the National Great Blacks in Wax Museum is further cementing its legacy as a cultural gem and a foremost preserver of African-American history. 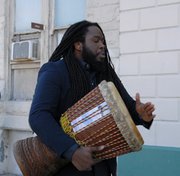 On Monday, November 23, 2015, deconstruction work began on a number of properties previously purchased by the museum in the 1600 block of East North Avenue in Baltimore, paving the way for an expansion that will help fulfill the vision of the museum’s founders, Dr. Joanne Martin and her late husband, Dr. Elmer Martin.

“Elmer Martin had a vision which was to challenge those who would say that people of African descent have no history that’s worth preserving,” Joanne Martin said.

“We had to bring people kicking and screaming with the notion that you can have tourism in an African-American neighborhood and getting people to understand that you can spur revitalization and economic development with a museum.”

The $75 million project will span the entire block between Broadway and Bond Street, with a sprawling green space in the back. It will contain space for exhibits, a gift shop, a genealogy center, theater, garden and classrooms.

It is being designed by Washington, D.C., architecture firm Davis Brody Bond and has a targeted completion date for sometime in 2018, according to Marin.

The museum, which in great artistic detail, highlights the practice of lynching; the use of slave ships; black inventors; and religious figures and scenes of segregation in the 1950s features wax statues of African-American heroes like Frederick Douglass, Nat Turner, Thurgood Marshall and many others.

Initially a storefront on West Saratoga Street, the museum now sits along several houses in an old fire station on East North Avenue.

The Martins, who were both professors at Morgan State University, came up with the concept in the early 1980s when they created figures of Frederick Douglass; Mary McLeod Bethune; Harriet Tubman; and Nat Turner.

The couple would take the figures to schools, churches and into local malls to help teach African-American history lessons. Martin says their goal was to display notable blacks and help students and others appreciate their accomplishments.

“Elmer’s ideas made sense. Sometimes, too much sense because he was always far ahead of everyone else,” Martin said.

Among the many ideas was to place alongside the wax figures in the museum such elaborate scenes as a full model slave ship that depicted African slaves being transported from across the Atlantic Ocean.

The lynching of blacks by racist whites in the 19th and early 20th centuries is also depicted at the museum, providing a complete history of African-Americans and their oppression and struggles.

There are also various depictions of how the criminal justice system failed blacks in America and the economic disadvantages African-Americans historically have faced.

“When you look at art districts throughout the nation and Elmer Martin was so far ahead of his time, when they were first talking about art districts, Elmer was saying that a single cultural entity can do the same and he called it a cultural hub,” Dr. Joanne Martin said.

“We get people who call from New York and ask us what else is there to do after the visit to the museum. The Cheesecake Factory and other businesses love us; so we say, ‘Why not do it?’ Bring it into our community, revitalize our community.”

Recognized as a national historic institution by the U.S. Congress, the National Great Blacks in Wax Museum attracts about 350,000 visitors each year and, with the expansion, it’s believed that as many as 500,000 will trek to the landmark.

“My husband use to walk down the street and stretch out his arms and say ‘This is my empire,’” Martin said. “If anyone had told me [when I was] growing up that I’d sleep across the home from [wax figures of] Harriet Tubman, John Brown and others, I wouldn’t have believed it. But, very little surprises me, even that we’re still here.”

“Maybe that’s because I have the lumps and bumps to show for it. Look, we’ve remained true to the mission and our community deserves to have this museum and this was a battle that was well-worth fighting for,” she said.