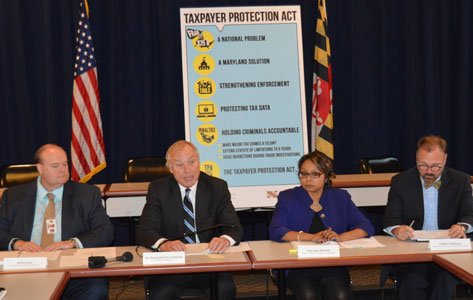 ANNAPOLIS, Md. — Maryland Comptroller Peter Franchot announced his plans to introduce legislation in January called, “The Taxpayer Protection Act” to better protect Maryland taxpayers from tax fraud and identity theft at a roundtable discussion with media on Tuesday, December 1, 2015 in the Assembly Room of the Louis L. Goldstein Treasury Building in Annapolis. He later spoke to the Maryland Association of Certified Public Accountants at their annual luncheon in Baltimore where the proposed legislation was the main focus of his remarks.

“The Taxpayer Protection Act will improve our ability to prevent tax fraud, to expand our efforts to protect taxpayer information and to increase the authority of our field enforcement agents to effectively hold fraudulent filers and preparers accountable,” said Comptroller Franchot. “The new legislation will strengthen my agency’s ability to enforce Maryland’s Tax Code and protect Maryland taxpayers.”

Since taking office in 2007, the Comptroller’s Office has stopped nearly $152 million in tax fraud. The proposed legislation will enhance the tools available to the Comptroller and his staff of highly skilled tax and enforcement professionals to detect and prevent tax fraud. Among the key provisions of the legislation are to make major tax crimes a felony and to extend the statute of limitations for tax crimes to six years from the current three years to allow sufficient time to properly investigate and charge in fraud cases in what are commonly highly sophisticated schemes.

“The Taxpayer Protection Act is absolutely critical to protect Maryland taxpayers and to combat fraud, and I am calling on my colleagues in the General Assembly to pass this critical piece of legislation in the next session,” Franchot said. “Passage of this act will allow my agency to keep pace with rapidly-increasing fraud schemes and fast-changing threats to sensitive data.”

The bill also will:

·Make it a felony for anyone to try to evade or defeat any tax imposed under the Tax General Article and impose a penalty upon conviction of the offense.

·Provide legal authority to issue injunctions against preparers under investigation for fraud to protect consumers while investigations are ongoing.

The introduction of The Taxpayer Protection Act is just the latest in a series of actions that Comptroller Franchot has taken to combat fraud. During the past nine years, the Comptroller’s Office has made unprecedented investments in dedicated personnel and advanced technology to detect and prevent tax fraud. Earlier this month, the Comptroller signed a Memorandum of Understanding in collaboration with the Internal Revenue Service, State Departments of Revenue, Tax Industry Electronic Return Transmission and related financial service organizations to protect taxpayers from the burdens associated with identity theft and refund fraud.

“As Comptroller, my top priority is to make sure that everyone is playing by the rules and paying their fair share, and to aggressively go after those who don’t.”