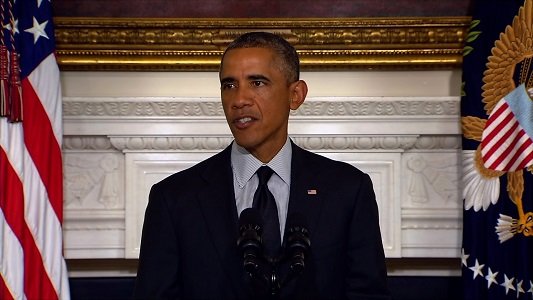 President Obama speaks on the passage of a bill that approves his request to arm and train Syrian rebels to fight ISIS (09/18/2014). (POOL photo)

President Barack Obama will visit the Pentagon on Monday to review the military campaign against ISIS with national security advisers, his first visit since attacks in San Bernardino and Paris.

White House press secretary Josh Earnest cautioned on Friday that no major policy shifts would come as a result of the meeting but that it is more of an "update." Obama is also set to give remarks following the meeting.

"They're always assessing whether or not there are some intensifications that can be used to benefit our strategy, but there is no specific announcement of a change that I know of that's planned for Monday, but we will see what the meeting yields," Earnest told reporters at the White House briefing.

Obama once again vowed that the United States is stepping up the campaign to destroy ISIS, during his weekly address issued Saturday.

"Our airstrikes are hitting ISIL harder than ever, in Iraq and Syria," Obama said. "We're taking out more of their fighters and leaders, their weapons, their oil tankers. Our special operations forces are on the ground -- because we're going to hunt down these terrorists wherever they try to hide."

Obama's ISIS policy has been under renewed scrutiny from Republicans following attacks on Paris and in San Bernardino. A CNN/ORC poll -- taken before the San Bernardino attack -- found that 60% of Americans disapproved of the President's handling of terrorism while 38% approved.

Defense Secretary Ash Carter said Friday that the President will be briefed by a wide range of advisers from the Defense Department, State Department, representatives of the intelligence community, law enforcement and homeland security.

"I expect him both to hear what we're doing, and continue to say what he's told me and Gen. (Joseph) Dunford, certainly for the military campaign, which is that he wants us to continue to come to him with proposals for ways that we can strengthen the campaign consistent with our overall strategic approach," Carter said Friday.

In his weekly address, Obama also referenced the decision to have the Department of Homeland Security update its alert system to "ensure Americans get more information."

Monday marks the President's first visit to the Pentagon since July.