Jurors in the William Porter trial said Tuesday they were deadlocked 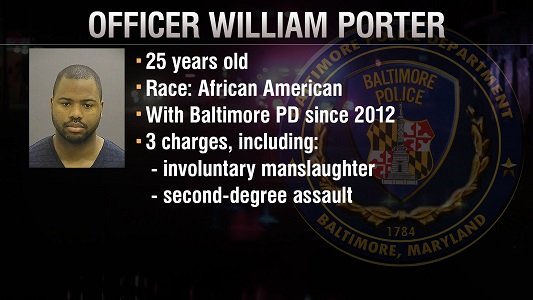 Officer William Porter is one of six Baltimore, Maryland police officers charged in the death of Freddie Gray. Gray was arrested by Baltimore police on April 12, 2015 and died on April 19. Porter is charged with involuntary manslaughter, second-degree assault and misconduct in office. (Photo: CNN)

BALTIMORE (CNN) — Jurors considering the trial of a Baltimore police officer in Freddie Gray's death told the judge once that they were deadlocked. Time will tell if a third day of deliberations will bring a change.

The jury resumed its talks Wednesday morning in the trial of Officer William Porter, one of six officers charged in the death of Gray, a 25-year-old black man who broke his neck in April while being transported in a police van, shackled but not wearing a seat belt.

Gray's death a week after his injury sparked demonstrations and riots and made him a symbol of the black community's distrust of police. The outcome of Porter's trial could have a domino effect on the other officers' cases.

The jury on Tuesday afternoon told a judge that they'd been been unable to reach an unanimous decision on Porter's charges, but the judge asked them to keep at it.

The jurors -- three black men, four black women, three white women and two white men -- resumed deliberating around 8:30 a.m. Wednesday. By 11:40 a.m., the jury indicated it had a message for the judge, after nearly 14 hours of deliberations over three days.

It wasn't immediately clear what the jury wanted.

If the trial ends with a hung jury, prosecutors would have the opportunity to try the case again.

"This would be a game changer," CNN legal analyst Sunny Hostin said.

A hung jury may result in a decision to change the venue of the trial, she said, and could affect the cases of the five officers who have yet to be tried, because prosecutors will have planned "to use a lot of this evidence against the [other] defendants."

Gray's injury happened as he was being transported following an April 12 arrest. Prosecutors say Porter, one of three black officers charged in the case, was summoned by the van's driver to check on Gray during stops on the way to a police station.

Prosecutors say he should have called a medic for Gray sooner than one was eventually called and also should have ensured that Gray was wearing a seat belt.

For convictions on some or all of the first three charges, he would face no more than 10 years in prison combined. There is no statutory maximum sentence for the fourth charge, misconduct.

All six officers have been suspended.

With a verdict possible this week, the city of Baltimore said it activated its emergency operations center Monday "out of an abundance of caution."

Last week, Baltimore Mayor Stephanie Rawlings-Blake and Police Commissioner Kevin Davis cautioned the city to be respectful as the verdict gets closer.

"Whatever the jury decides, we must all respect the process," the mayor said last week. "If some choose to demonstrate to express their opinion, that is their right, and we respect that right, and we will fight to protect it. But all of us today agree that the unrest from last spring is not acceptable."