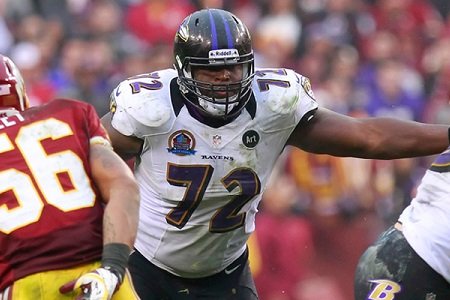 The Kansas City Chiefs will come to M&T Bank Stadium on Sunday sporting a seven game winning streak. They have been playing sound football. They are likely to be without their premier pass rusher Justin Houston, but they still have plenty of horses in the stable.

Kelechi Osemele will get his second start at left tackle after moving from left guard prior to last week’s game against the Seattle Seahawks. The move was one that the Ravens have made with an eye on both the present and the future.

John Harbaugh knows that if Osemele is able to continue to get reps at left tackle, he will only get better.

“I thought ‘K.O.’ [Kelechi Osemele] played well last week, and yet, there are going to be so many things he can do better as he gets a feel for the position,” Harbaugh said. “He played left tackle in college, so you felt like he could be a left tackle.”

The new position requires an adjustment in many facets. Osemele pointed out how playing left tackle is more of a finesse position than the brutal warfare that occurs along the interior. He said that moving to left tackle requires him to tone down his aggression a little bit and focus more on using his skills as an offensive lineman.

Another wrinkle for Osemele is that he needs to study more film while playing left tackle. Playing in the phone booth as an interior lineman typically allows guys to just react as things unfold so quickly. Playing left tackle warrants a more thorough preparation plan.

“It’s a lot more film study, to be honest with you. Things happen a lot faster on the inside, so you really don’t have to watch that much film, but it’s a different story outside on the edge, because you’re more on an island,” Osemele said. “So, it’s a variety of moves that guys can give you to get to the quarterback. It’s a more film study on your own, not just here, but when you’re at home, before you go to bed and stuff like that.”

Watching an increased and more in depth amount of film has allowed Osemele to get a strong feel for what kind of player he is facing when the Chiefs come to town. A lot of attention has gone to Houston over the years, but Tamba Hali has been a force rushing the passer from the right side.

“Tamba Hali is a great player. I’ve heard about him a lot. I remember seeing him out there my rookie year, working his hands before the game, and I know that’s a big strength of his, Osemele said. “He’s really good at turning the edge. He’s got some power to him. [He’s a] 10th-year veteran in the league.”

Osemele has taking extra time to study his opponent this week and is well aware of the challenge that he is facing.

It’s clear that Osemele has the makeup that it takes to play a premier position in the NFL. Just like anything, his ability to play left tackle. It will increase as he plays the position more and more.

“It’s fun. It’s challenging. It gets me working on my game. It’s something different every day,” Osemele said. “It’s a unique thing to go out there and work on something that you haven’t been playing. So, it’s just fun.’”