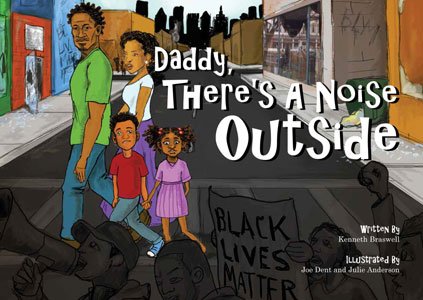 Executive Director of Fathers Incorporated; Kenneth Braswell is no stranger to finding ways to help his community address sensitive subjects. His professional career is currently centered on running the 11-year-old not-for-profit organization dedicated to strengthening the community and family infrastructure by encouraging and enabling the positive involvement of fathers in the lives of their children.

Fast-forward thousands of articles, three books and two documentaries later, Braswell has turned his attention to children’s literature. His newest venture “Daddy, There’s a Noise Outside,” takes the complex issue of protesting and breaks the conversation down so that a first grader can understand.

“The idea came when my six-year-old son asked my wife why was I in Baltimore on the day that the indictments were issued [for] the six police in the Freddie Gray case,” said Braswell. “To which she said to him, ‘wait till your father comes home, and ask him.’”

That explanation materialized into a 24-page children’s book focused on helping first, second and third graders understand the nuances of protest.

The story begins when two children are awakened by noises in the middle of the night outside the window of their inner-city neighborhood. Both their Dad and Mom spend the next morning explaining to them what was taking place in their community.

A recent article by Daniel José Older of The Guardian speaks of the low percentages of children’s books written depicting African American characters. The article entitled, “Do black children's lives matter if nobody writes about them,” states that in 2014, only five percent of the 3,500 children’s books published were about black characters.

“There is a huge opportunity for black authors to use children’s literature to [educate] them on current societal issues,” said Braswell.

The book is available for pre-sale at http://www.fathersincorporated.com/dtano.html.