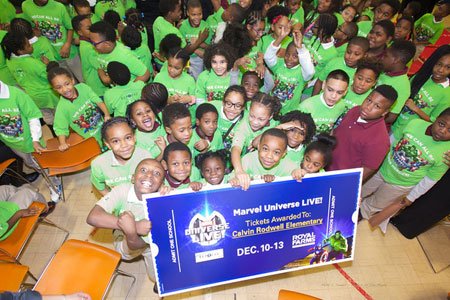 (Left) Students from Calvin M. Rodwell Elementary School received a visit from Marvel superheroes Captain America and the Black Widow on Tuesday, December 8, 2015 for their efforts in collecting more than 5,000 recycled plastic bottles within a two-week period. (Photo: Mark Dennis, Office of the Mayor)

BALTIMORE — “Do I have any superheroes here today?” asked Baltimore City Mayor Stephanie Rawlings-Blake as she stood in front of 250 first, second and fifth grade students at Calvin M. Rodwell Elementary School in Baltimore City on Tuesday, December 8, 2015. The answer was a resounding “yes” from the students dressed in khaki pants and green Marvel Universe LIVE! Superhero t-shirts.

Students at the elementary school collected more than 5,000 recycled plastic bottles within a two-week period in a competition for more than 100 Baltimore County and Baltimore City schools to determine which school reigned as “Recycling Superheroes.”

For their effort, the young recyclers received free tickets to the Marvel Universe Live! show at the Royal Farms Arena and bragging rights for being a top collecting school. The students’ recycling and collection efforts translated into a $80,000 benefit to he City of Baltimore and the community in which they live.

Marvel Universe Live!, an action-packed, entertainment experience, teamed up with Repreve® their official recycling partner, to help educate families about the importance of recycling at the shows, in their homes and throughout school districts nationwide.

Every student received a co-branded Repreve® and Marvel t-shirt and knapsack to help celebrate the success of the recycling program.

Mayor Stephanie Rawlings-Blake told the students how much she appreciated their commitment to creating a cleaner environment. She reminded the students that we don’t get a ‘do-over’ and we only get one planet.

“Participating in programs like this creates a sense of responsibility, even at a young age,” said Samuel A. Rather II, principal of Calvin M. Rodwell Elementary School upon receiving a certificate of commendation for the school’s collection efforts.

Marvel characters Captain America and the Black Widow made an appearance to meet and greet the children. Marvel representatives engaged the students in basic calisthenics and a game of “Simon Says” to promote exercise and the importance of having a strong body— just like a superhero.

Marvel representative Andrew Mihalko who is part of the 52-member cast said all performers must be in top physical condition to endure the short bursts of energy required for being a superhero.

“Encouraging healthy habits is the foundation for fostering a healthy lifestyle. This program— by demonstrating the importance of preserving the environment— is an exciting way to teach children how to make thoughtful decisions that will follow them the rest of their lives,” said Mayor Rawlings-Blake.

Principal Rather applauded the commitment of the eight student leaders and teacher coordinator, Krystal Kessler who organized the program.

“If the students can be recognized for doing something positive, and helping their community, then naturally I will applaud their efforts,” said Rather.