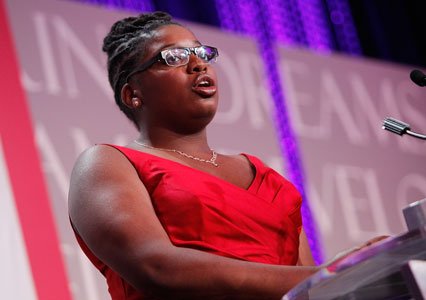 Prospective and current students at Historically Black Colleges and Universities (HCBUs) in search of financial aid may want to take a look at the new scholarship opportunities from The Thurgood Marshall College Fund (TMCF).

Beginning in February 2016, the District of Columbia based nonprofit organization will offer programs, scholarships and networking opportunities to students at 47 publicly supported HBCUs.

Over $4.8 million was raised at The Thurgood Marshall College Fund’s 27th Annual Awards Gala on November 16, 2015 at the Washington Hilton. Proceeds from the event enable TMCF to continue its work as a critical link between students getting the most from their education and the opportunity to become a part of a new generation of global leaders.

At the gala, five of the country’s foremost visionaries who have used their status to exhibit courage, support education and positively impact the lives of students attending HBCUs were honored.

The people honored were: Thomas A. Cole, partner and former chair of the Executive Committee of Sidley Austin LLP; John O. Brennan, director of the Central Intelligence Agency; Samuel R. Allen, chairman and chief executive officer of Deere & Company; Dr. David Hall, president of the University of the Virgin Islands; and Daymond John, founder of FUBU and cast member of ABC’s “Shark Tank.”

“What we try to cover in our scholarship to a student is the average cost of tuition and fees, so we want to take tuition and fees off your plate so that you can use something like your Pell Grant, work study or whatever to cover your room and board, but our goal is not to get you half way to college. We want to get you through college,” said Johnny C. Taylor Jr., president/CEO of TMCF.

TMCF’s impact is evident from high-achieving students like 21-year-old Mary Bacon, a junior at Coppin who transferred from Alabama State University (ASU). Bacon is a social work major who was recently awarded a Wells Fargo Scholarship through TMCF.

“I really want to help people live out their purpose,” Bacon said, explaining why she wanted to attend college in an urban setting. “I want to be able to walk anywhere and know that I can get some type of social work experience, just to be well-rounded and competent. I felt like the best place for me to fulfill that was at Coppin State.”

Bacon’s family is unable to help with her tuition or living expenses. During the gala, she brought attention to college student homelessness. Since last summer, Bacon told the audience that she slept in her car in Druid Hill Park, parking lots and other temporary locations and has been able to maintain a 3.4 GPA.

“It was a different place where I slept every night. I didn’t know where I was going to be,” Bacon said. “I’ve lived in emergency shelters [and] transitional homes. One of the transitional homes I was living in was for (people who are) ages 18-21.”

After hearing Bacon’s story, TMCF donors and sponsors attending the gala collected enough money so she would not have to live in her car anymore. She recently signed a lease for a new apartment.

“It feels really, really, really awesome just to know that people are investing in me as much as they have in my life,” Bacon said. “I know that I would not be where I am without it.”

Taylor says in 2016, TMCF wants to focus on building an endowment for TMCF college students like Bacon.

For more in formation about TMCF, visit: www.tmcf.org.