Ravens WR Kamar Aiken: It’s a blessing to get the chance to prove myself 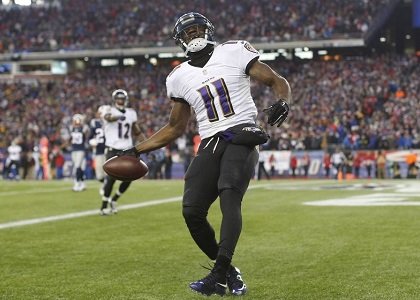 There are very few places where you can see competitors as fierce as the players in the NFL. The players are literally evaluated every time they set foot on the football field. It goes beyond that as well; they have to prove themselves on a daily basis.

Jobs are always on the line in the NFL. Kamar Aiken knows this all too well. Aiken had to prove himself as an undrafted rookie free agent from the University of Central Florida.

Aiken spent the next three seasons bouncing on and off of the practice squad and active rosters with the Buffalo Bills, Chicago Bears and New England Patriots.

In 2014, Aiken settled in with the Baltimore Ravens and has taken full advantage of his opportunity. Aiken was named a starter prior to this season. His targets increased greatly once Steve Smith Sr. was lost for the season with an Achilles injury.

The former journeyman pointed to his hard work paying off when he was asked about being able to step up when he was called upon. He has a fighter’s mindset. John Harbaugh felt that part of his personality is what led to his success.

The Ravens then turned to Aiken to be their top receiver. Aiken responded by catching seven of his 14 targets for 73 yards. He has 54 receptions for 674 yards and four touchdowns this season.

Aiken has continued to show up for the Ravens. Head coach John Harbaugh appreciates how Aiken has kept fighting during a tough season.

“He just doesn’t get frazzled. He’s a real tenacious personality and very persistent human being,” Harbaugh said. “I think that’s a big part of his success.”

Marc Trestman pointed to how Aiken is out on the field leading the way for a young wide receiver unit in practice and on game day. The hard working receiver doesn’t do much talking. He lets his actions do all of the talking for him.

“He does it all through his performance and through his work ethic, both in the classroom and on the field, and what he has been able to do is get better each and every week,” Trestman said. “He has gained confidence in himself because he has had the opportunities, and he’s had success. “

Trestman is proud of how Aiken has remained strong and has made the most of the opportunity to be a leader. He said that Aiken has even helped to make the guys around him better. Aiken has earned the trust of his quarterbacks. They have no hesitation to throw the ball in his direction.

The quarterbacks trust him because he always makes a play on the football. Aiken uses his body to box out defensive backs and has the strength to force his way to the ball on contested throws. The desire to compete is something that Aiken puts on display every day. It is a thing of beauty to Harbaugh.

“I think he’s making plays. That’s the main thing with Kamar; he just comes up, and he makes plays,” Harbaugh said. “He is about as good and tough a competitor as you’re ever going to see. He’s running good routes, he learns from his mistakes and he doesn’t get flustered.”

The formula for making it through a tough season has been pretty simple for Aiken. “I took it day by day. I tried to soak in as much as I can learn from Steve [Smith Sr.] and other guys,” Aiken said. “My mindset has been to just make plays. It’s blessing to get the opportunity to prove myself. They don’t owe me that. My hard work is paying off.”