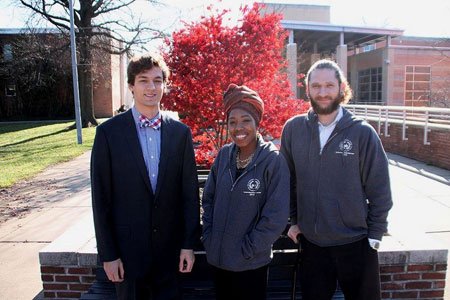 Despite not moving on, the students representing BCCC at a daylong Two-Year College National Ethics Bowl regional competition November 21— Crystal Santiful, Joseph Jones and Aaron Laciny— say they are proud of how they competed and came away feeling more confident in their public speaking abilities and much more adaptable to high-pressure situations. The event was held at the University of Baltimore Hoffberger Center for Professional Ethics.

“To me, what makes their achievement even more impressive is they’re not philosophy majors,” said Moses Wamalwa, 22, who coached the BCCC Ethics Bowl team. “In this competition, you had to know the philosophies. You had to know the ethical theories. Our students had to learn a semester’s worth of information in a matter of days. I had faith they would do well but I had no idea they would make it as far as they did.”

BCCC was among nine institutions vying for a spot in the 2016 Intercollegiate Ethics Bowl Championship scheduled for February 21, 2016 in Reston, Virginia. Anne Arundel Community College and the Community College of Baltimore County–Essex also took part in the competition.

Shaking off some early jitters, the BCCC team proceeded to accumulate the second-highest point total in the competition (563), bested only by Harper College of Palatine, Ill. (616.5), which won its second consecutive regional title and its third since the competition for two-year institutions was introduced. Harper went unbeaten in the regional round, but the BCCC team held its own against this more experienced group.

Hundreds of undergraduate students in teams across the U.S. and around the world compete in 10 regional Ethics Bowl competitions each fall to earn an invite to the national competition, which just recently began including junior colleges. Competitions focus on cases developed by experts affiliated with the Association for Practical and Professional Ethics. Students must be able to demonstrate their ability to understand the facts of a given case, articulate its ethical principles, present an effective argument on how the case should be resolved, and respond effectively to differing viewpoints presented by the opposing team. Although the competition can be intense, teams are encouraged to show each other respect and courtesy while debating topics. Teams argue and defend their moral assessment of complex, contemporary ethical issues. Topics at the center of debate in last month’s regional round included the Indian Child Welfare Act, the Law Enforcement Officers Bill of Rights in light of the Freddie Gray case, and the morality of forcing juvenile cancer patients to undergo chemotherapy following the ruling in the “Cassandra C.” Connecticut court case.

“The competition was very intimidating,” said Santiful, a General Education major at BCCC. “Our opponents were well prepared. But our team chemistry was our strength.”

The students hope their performance in the Ethics Bowl will help increase interest in the BCCC Ethics and Values Club. With enough support and increased membership, Wamalwa said, the club seeks to become more involved in the community and establish scholarships for its members.