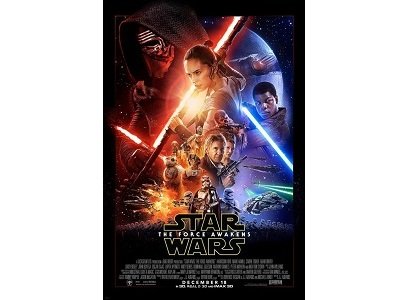 "Star Wars: The Force Awakens" became the biggest opening in movie history bringing in an estimated $238 million in the U.S. this weekend.

The film flew past the opening weekend record held by Universal's "Jurassic World," which made $208.8 million on the weekend it opened in June.

The Disney film opened in more than 4,100 theaters. It is the seventh in the "Star Wars" saga, and the first film starring beloved characters like Harrison Ford's Han Solo and Carrie Fisher's Princess Leia since 1983's "Return of the Jedi."

Fans of the franchise also came out in record numbers over the weekend to be introduced to new characters like Daisy Ridley's scavenger Rey, Adam Driver's villainous Kylo Ren, and John Boyega's stormtrooper turned good Finn.

"For 'Star Wars' fans and Hollywood, this weekend was like the Super Bowl, the World Series and the Kentucky Derby all rolled into one perfectly realized movie event," said Paul Dergarabedian, senior media analyst at Rentrak. "It's also a great weekend to be a theater owner with an incredible number of satisfied patrons enjoying the majesty of the big screen communal experience."

The newest tale from a galaxy far, far away was a critical as well as a financial hit.

"The Force Awakens" garnered a solid "A" CinemaScore and a near perfect 95% score on RottenTomatoes.com.

But this may just be the beginning of the film's box office empire with movie choices in January and February pretty depleted at the cineplex.

"With incredible reviews and an excited hardcore fan base that will want to go back over and over again, 'Force Awakens' will have long-term playability well into 2016 where it should earn the lion's share of its potentially record breaking worldwide revenue," Dergarabedian said.