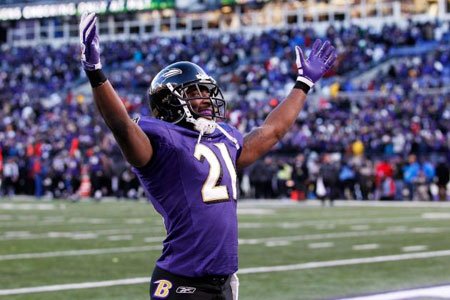 Ravens cornerback Lardarius Webb celebrates after a play during the 2015 season at M&T Bank Stadium in Baltimore, Maryland. (Courtesy Photo/NFLPA.com

The Baltimore Ravens strongly believe in giving back to the community. The team is deeply involved in various community outreach programs.

Ravens cornerback Lardarius Webb is one player who is firmly entrenched in the Baltimore area community because of the many things he does to help out less privileged youth and their families.

Webb’s community work has rubbed off on his teammates as well.

The Ladarius Webb Foundation hosted the Sixth Annual Toy Drive this week. Webb was joined by fellow Ravens defensive back Anthony Levine as they collected toys at the Webster Kendrick Boys and Girls Club in Baltimore.

The goal was to collect as many toys as possible to give to some of the less fortunate families in Baltimore. Webb was happy to be able to help provide Christmas cheer to so many families. The fact that some of his teammates have joined him in giving back makes it even better.

“It means a lot to me personally because I can give back to the kids,” Webb said. It’s good for us to connect as fans and teammates. Giving back to the community together as a team is the best.”

The toy drive is a continuation of a project that Webb put on through his foundation last month. They held a toy drive just before Thanksgiving at the Greene Turtle restaurant and bar in Owings Mills.

Webb does a lot of work with the United Way in Baltimore. He is truly a man of the community. His foundation hosts a variety of year round events that benefit the Baltimore area.

Bringing smiles to the faces of many area children is one of the many things Webb does through his foundation.

According to their website, “The Lardarius Webb Foundation was formed to raise and distribute funds to provide aid to underprivileged children and their families.” Their goal is to encourage young men and women to stay off the streets and out of the trouble that lurks in the shadows.

Members of the foundation further help youth by motivating them to build confidence and to set positive goals.

For more information about The Lardarius Webb Foundation, visit www.lardariuswebb21.com