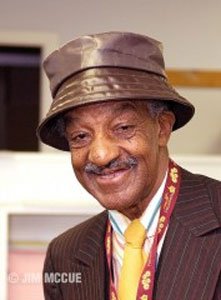 Howard Gordon Hall, best known as “Gelo,” was born in Baltimore, Maryland to Howard Hull and Evelyn Sheridan on April 3, 1927. He was educated in the Baltimore City Public School system. He served in the United States Army and was honorably discharged in 1946.

He married his high school sweetheart, Lillian Stewart, on October 22, 1946. From this union, two beautiful daughters, Janis and Judy Hall were born.

His father was a jockey’s valet and introduced Gelo and his brother, Angelo to the racing industry at very early ages. While working at the racetrack, his brother was known as “Big Gelo” and he was known as “Little Gelo.” Howard later became the one and only “Gelo.”

At 14, he was employed by H.L. Straus to break yearlings at Cherry Hill Farm in Reisterstown. He followed the horses to Pimlico, and went to work for Frank “Downey” Bonsal. Over the years, his career included positions as an exercise rider, licensed trainer, jockey’s agent, and patrol judge. He was a graduate of the Jockey Club School for Racing Officials.

Gelo was a remarkable part of Maryland’s Thoroughbred history and was fortunate to see some of the best horses and races the sport has ever produced. He was at Pimlico in 1938 to witness the match between Seabiscuit and War Admiral, perhaps the most famous race of all-time.

Over his stellar career, Gelo was featured in numerous news articles and documentaries, and received several commendations. Gelo was highly regarded for his institutional memory of the racing industry. For his lifetime achievements in the racing industry, Gelo was given the Joe Kelly Maryland Million Unsung Hero Award on October 18, 2014. The award “celebrates important characteristics that are valuable, but often unrewarded. This award recognizes honesty, hard work and humility- qualities which serve as inspiration to others.” This accurately describes the essence of Gelo.

Gelo’s faith in God guided his life. His mother raised him in the Episcopal faith. He was a member of The Church of St. Katherine of Alexandria Episcopal Church to which he stayed faithful until his passing. He worked with the Race Track Chaplaincy from its infancy and watched it grow into a strong presence on American tracks. He influenced and guided many people to a better path. He always left with the parting words “May the peace of the Lord be always with you.”

His beloved wife of 68 years, Lillian, and his daughter Judy preceded him in death. Gelo leaves cherished memories to his daughter, Janis Hall and a host of relatives and friends.