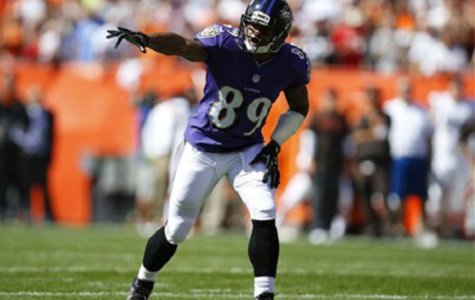 Ravens wide receiver Steve Smith Sr. lines up before a play during the 2015 season at M&T Bank Stadium in Baltimore, Maryland. (Photo: www.nflpa.com)

OWINGS MILLS, Md. — The Baltimore Ravens locker room had a very positive vibe on Wednesday. The team is coming off of an upset win against the rival Pittsburgh Steelers. John Harbaugh has already said that these last games will set the tone for the 2016 season.

Another tone setter for next season will be the return of one of their emotional leaders in wide receiver Steve Smith Sr. The veteran announced via Twitter that he will return for the 2016 season. He discussed the decision with his family and they gave him the blessing to return one more season.

Harbaugh has always felt that Smith Sr. is a player they can rely on to set the tone, so having him back next season is a huge win for the Ravens.

“He is definitely a tone-setter. I don’t think you can get by in this league without a guy with that personality. He is just a guy who is a pit bull,” Harbaugh said. “He’s like daddy pit bull, and he has all these little young pit bulls he’s trying to raise up the right way, and I mean that in the most positive way. He’s just a really fiery competitor.”

Smith Sr. was playing very well prior to rupturing his Achilles tendon on November 1st. He was among the league leaders in yards after the catch, broken tackles and receiving yards at the time. The veteran receiver was on his way to another 100-yard receiving game prior to being injured against the San Diego Chargers.

The injury was a double rupture and was said to have been torn off of the bone. He was carried off of the field with a towel over his head.

The 2015 season was supposed to have been his final season, but there was little doubt that he would not allow his last play in the NFL be one in which he was carried off of the field due to injury. Kelechi Osemele said he felt that was the reason Smith Sr. would return.

“I knew as soon as he [Steve Smith Sr.] got injured he was going to be back. That’s just Steve. That’s not what he came here to do. He didn’t come here to go out like that,” Osemele said. “I’m not surprised at all about that. He’s not the type of guy to go out like that.”

Smith Sr. has endeared himself to Ravens fans in the two years that he has been with the team. He is already one of the most well liked players in recent years. The Ravens players are happy to have him back.

Osemele said he feels Smith Sr. will come back in the best shape and dominate. Cornerback Jimmy Smith said it’s great to have a tremendous leader such as Smith Sr. back because it will only help the team.

There are a few milestones within reach for Smith Sr. He is only 39 receptions away from the 1,000 career receptions mark. He is also only 68 yards away from posting 14,000 which would put him in the top ten all time.

Marshall Yanda summed it up the best when he was asked about Steve Smith Sr. returning.

“We’re very happy to hear he’s going to come back,” Yanda said. “If you’re in a war, there’s no better guy that you want on your sideline with you in that war than Steve. I’m fired up about it.”