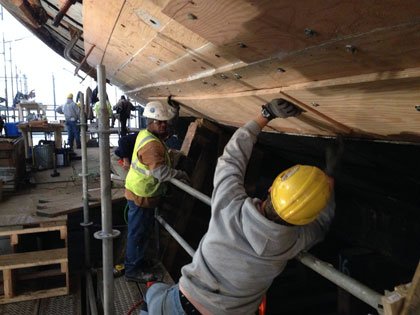 A crew of skilled men and women work long days to restore USS Constellation's wooden hull. When the historic USS Constellation returns to the Inner Harbor on or around February 20, 2015, she will be open daily for public tours as a living classroom and as the flagship of the Historic Ships in Baltimore fleet. Courtesy Photo/Living Classrooms Foundation (Courtesy Photo/Living Classrooms Foundation)

BALTIMORE — Currently the Coast Guard Yard, the U.S. Coast Guard’s 115-year old shipyard, is a scene of living history as the USS Constellation is undergoing a critical four-month repair.

The USS Constellation is a U.S. Navy “sloop-of-war” with provenance dating back to the original frigate Constellation built in 1797. She is usually berthed in Baltimore’s Inner Harbor Pier One. Historic Ships in Baltimore/Living Classrooms Foundation serves as the vessel’s caretaker on behalf of the City of Baltimore. During the USS Constellation’s last dry-dock in 2011, a major rot problem was discovered below the waterline. Since then over $2 million has been raised to save this National Historic Landmark.

A crew of skilled men and women are working long days to restore USS Constellation’s wooden hull. Members from Project SERVE, a Living Classrooms Foundation program that provides on-the-job training for unemployed ex-offenders and disadvantaged young adults through construction and revitalization work in Baltimore’s toughest neighborhoods, are soaking up history as they provide an important and valuable addition to the labor force. Each day Project SERVE members make up half of the men and women working on the ship.

The historic ship was found to have extensive rot in her laminated hull that needed to be removed to prevent the deterioration from spreading into the ship’s historic timbers and to maintain her watertight integrity. Twelve Project SERVE workers are helping to replace the hull planking. Jobs include demolition, putting on new planks, general painting, cleanup, etc. The project began the first week of November and is very labor intensive. Project SERVE workers didn't need any prior woodworking experience for the job but “learning by doing” is giving the men and women additional skills they can use to enter the labor force.

“Working on the USS Constellation has been a great experience. I’ve been able to learn a lot of history and about how the ship has been maintained. My motto is there’s no dumb question, so I ask a lot of questions and learned a lot and gained helpful experience. I’m grateful for the job opportunity, the experience, and meeting and working with all of my co-workers and bosses.

I am appreciative of the whole experience,” said Melvin Moses, Project SERVE member.

People from all over Baltimore are coming together to preserve USS Constellation. When docked at her Inner Harbor berth, the historic ship is a wonderful “living classroom”—allowing students and visitors to learn first-hand about 200 plus years of naval and maritime history.

“With such big job to complete in such a short time frame this has been a very challenging project, as we knew it would be from the start, but thanks to strong partnerships with both the personnel at the USCG Yard and the hard-working members of Project SERVE, as well as the generous support of the community at large, we will be successful in our mission to save the USS Constellation,” said Chris Rowsom, executive director of Historic Ships in Baltimore and Vice President of Living Classrooms Foundation.