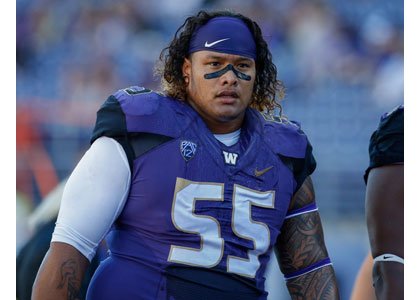 Danny Shelton is a prospect that has drawn comparisons to Baltimore Ravens defensive lineman Haloti Ngata, a fellow Polynesian. Many are intrigued by his size, specifically his lower body. Teams covet a guy with his size that can play multiple positions on the defensive line. That versatility is what has caused some to compare him to Ngata.

Shelton knew that his senior year was one in which he really had to show the country what he is capable of doing. He said that he made his mind up and he was going to be the energizer for his teammates before his final season at the University of Washington. “I committed to my team that I would be that guy that would bring energy to practice every day.” Shelton continued, “My mentality came because I realized it’s my last season and I had to become the guy to set the example for the younger guys with this new coaching staff. I wanted to make a commitment to them. I was already seen as one of the leaders so I had to step up.”

Energy is not the only thing that he brings to the table. Shelton mentions his body size and the ability to take up two to three blockers as his number one strength. It’s all about effort and energy. As Shelton said, “That’s what nose tackles do. I am constantly trying to get to the ball. I try to be a high motor guy.” He checked both of those boxes off during practices at Senior Bowl week.

The comparison to Haloti Ngata is one that Shelton really likes. His eyes lit up when we spoke about him at the Senior Bowl. Shelton is proud of his Polynesian decent. He wore the lava-lava (cultural garb) after the official weigh in and when he was at the media night portion of the Senior Bowl. As a young man of Samoan decent, he looked up to Ngata who is from Tonga.

“It’s awesome. I remember growing up wanting to be just like him, wanting to go to Oregon, wanting to match him. He’s a great ambassador for the Polynesian community.” Shelton said. “He’s a role model. I’ve always had this big body and I’ve always known that I need to know how to use this big body. Haloti, he’s been experienced at that and I am learning from him.”

It’s easy to see that Shelton is a student of the game when watching him. He has developed a “grab and shed” technique that he utilizes to free himself from blockers and tackle ball carriers. He makes the calls on the defensive line as well.

He credits his mental capacity for allowing him to be able to learn all of the positions on the defensive line. Shelton says that he’s always been able to jump from nose tackle to three tech or to five tech. He makes it his business to learn what different guys are doing at different positions, which is something that he admires about Ngata.