'Doin' It In the Park' explores the history, culture and social impact of New York's summer basketball scene 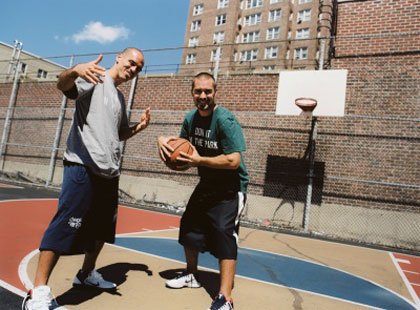 (BPRW) — February 3, 2015 – ASPiRE (@tvASPiRE) today announced the exclusive premiere of the acclaimed, award-winning documentaryDoin’ It In The Park: Pick-Up Basketball, NYC (doinitinthepark.com/film), directed by Bobbito García (“It’s The Shoes,” author of Where’d You Get Those? NYC’s Sneaker Culture: 1960-1987) and Kevin Couliau (Heart & Soul Of New York City). Called “an exuberant introduction to the rich lore of the city game” by The New York Times, the documentary will debut on ASPiRE on Thursday, February 19 at 9 p.m. EST, with an encore at 11 p.m. EST.

Directed by García and Couliau, Doin’ It In The Park: Pick-Up Basketball, NYCexplores the history, culture, and social impact of New York’s summer b-ball scene, widely recognized as the worldwide “Mecca” of the sport. In New York City, pick-up basketball is not just a sport. It is a way of life. There are 700+ outdoor courts, and an estimated 500,000 players, the most loyal of which approach the game as a religion, and the playground as their church.

“You can play high school or college for four years. You can play Pro for a decade. You can play pick-up … for life.” Doin’ It In The Park lovingly uncovers this movement through the voices of playground legends, NBA athletes (including superstar Julius “Dr. J” Erving), and most importantly the common ballplayer who all day looks forward to calling “next” game at their local schoolyard. Directors García and Couliau visited 180 courts throughout NYC’s five boroughs to create their documentary. They traveled to a majority of the locations by bicycle, carrying camera equipment and a ball in their backpacks. The film’s title refers as much to the subject matter as it does to the method of filmmaking, providing an unprecedented perspective on urban America’s most popular, and accessible, free recreation.

“We can’t tell you how excited we are to have our film air on ASPiRE,” said Directors Bobbito García and Kevin Couliau. “We made the film to inspire people everywhere to play ball outdoors. The fact that the legendary Earvin ‘Magic’ Johnson and his network is broadcasting it will only help continue to spread our message.”

The soundtrack features music by The Blackbyrds, Quantic, 20SYL, The Roots and Jurassic 5.