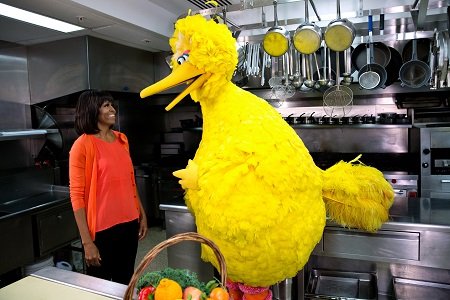 WASHINGTON (CNN) — First, they came for the giant sodas. Then, the salt. Now ... the cheese dust?

In the March issue of Cooking Light magazine, first lady Michelle Obama says she's banished processed foods from her family's table in an effort that began nearly a decade ago.

That's when, acting on the behest of the family's personal chef, she exiled the venerable boxed macaroni and cheese to the Obama scrap heap of history.

"He said, 'there's nothing wrong with mac and cheese, but it's got to be real food,' " Cooking Light quoted Obama as saying in an article celebrating the fifth anniversary of her Let's Move fitness initiative.

"So my oldest daughter (Malia), who was probably 8 at the time, he took a block of cheese, and he said, 'if you can cut this cheese up into the powder that is the cheese of the boxed macaroni and cheese, then we'll use it.' "

"She sat there for 30 minutes trying to pulverize a block of cheese into dust," Obama said.

Suffice to say, it didn't work.

"And from then on, we stopped eating macaroni and cheese out of a box, because cheese dust is not food, as was the moral of that story," she said.

The family went on to eliminate all traces of processed foods from their diet: "all those packaged lunches, all of the canned juices," she said.

"We started using fresh-squeezed juice and added more water into their diet," she told the magazine. "So when the kids were thirsty, we would even mix water in juice just to dilute it so it would get them out of that habit of wanting that sugary taste. And the kids adapted to the changes very quickly. "

Since becoming first lady, Obama has been a vocal proponent of fitness and healthy eating. In addition to the Let's Move campaign, she oversaw the creation of a vegetable garden at the White House and championed 2010 legislation that increased subsidies for school meals and gave the federal government more authority to set standards for fold sold in school vending machines.

While well-received by many health and fitness advocates, the first lady's statements at times have drawn groans or worse, and the Cooking light article is no different.

For some, it was a chance to poke fun.

For others, it's about darn time.

Of course, all of the Obamas' efforts to get their daughters to eat more healthfully could soon go up in a cloud of college dining hall fast-food glory. Malia, whose failed cheese dust experiment helped set the family on their processed-food-free journey, is about to go off to college, her dad noted recently.

"I joke with Malia and Sasha, because Malia is now at the age where she's starting to look at colleges, and I said, 'These days, I hear everybody is looking for fancy gyms and gourmet food and really spiffy dorms,' " he said last week.