As part of a Black History Month celebration, Republicans paid tribute to record-setting members of Congress 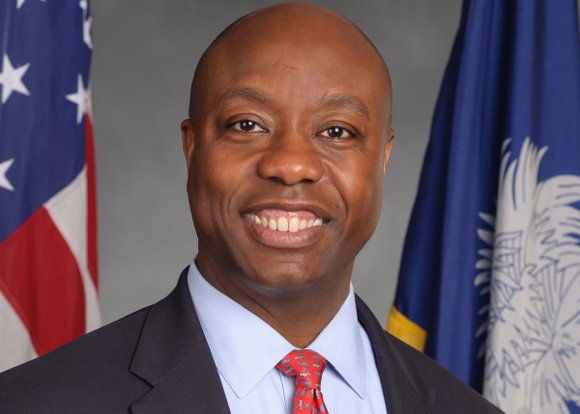 The committee held its third annual awards lunch at the Howard Theatre, a historic black landmark in Washington where the RNC and more than 400 attendees also paid tribute to the late Republican Sen. Edward Brooke, the first African-American popularly elected to the U.S. Senate, who died last month at the age of 95.

"It's amazing to me that we're dealing with 'firsts' in this century," Johnson told CNN in an interview after the event. "There should be 'seconds, thirds and fourths,' and really the Republican Party is open to all."

While Republicans had a big year in 2014, Scott and Love still won largely with the support of white voters, while Hurd won with the support of white and Hispanic voters. In South Carolina, for example, Scott won 10% of the black vote, only slightly more than the other South Carolina senator, Lindsey Graham, who's white and brought in 6% of the black vote.

"We've got a ways to go," RNC Chairman Reince Priebus said on stage Wednesday. "I know we're not going to carpet the world here in one or two years or one election cycle, but it's an improvement, and we always have to be improving as a party."

Black voter turnout in the midterm election this past November did reach into the double-digits in some states, like Florida (12%), Wisconsin (10%) and in Ohio, where Gov. John Kasich won re-election with 26% of the black vote.

For her part, Love told a story about a student who asked Love how she's able to be a black Republican woman living in a red state like Utah in "today's America."

"I am all of those things because I refuse to fit this mold that society tells me I need to fit into," she replied.

Love also urged Republicans to focus on a message of being independent from government.

"People who are independent are the ones that make a difference," she said. "We need to remove ourselves from a different kind of slavery, and what I'm talking about is the slavery that comes from being dependent on people in power."

Narrowing the GOP's gap with minority voters became a priority following the 2012 presidential loss, when Mitt Romney won only 6% of the African-American vote and 27% of the Latino vote. Romney's privately recorded comments, in which he argued that 47% of Americans were dependent on government, became a damaging moment for the then-nominee, and it's a message that Republicans are still trying to run from.