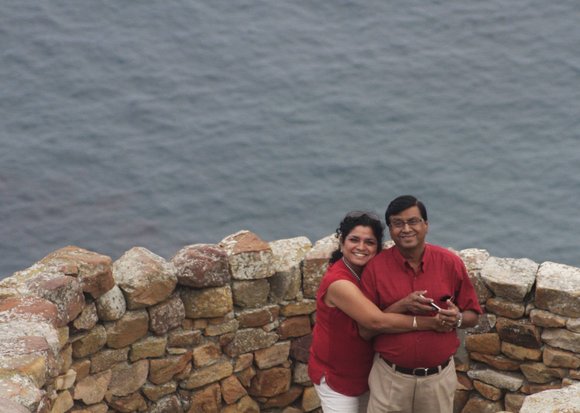 Shanthi and C. S. Seshadri were arranged to be married in 1985. They say it was a perfect match. (Photo: Supraja Seshadri/CNN iReport)

(CNN) — My parents, Shanthi and C. S. Seshadri, met only twice before their wedding 30 years ago in southern India.

My father was 32. My mother was 21 and had no say in the pairing. It was a shock to her when the man who came to see her was my father. She didn't understand why her brothers and her father would set her up with a man 11 years older, from a family that was so different from hers. He was a city boy, had traveled to and lived in various parts of India. He enjoyed cheese puffs, knew how to eat with chopsticks and the names of different types of alcohol. She had never ventured too far out of her town of Vellore, had never heard of these foods and alcohol was an unspeakable word.

Whether it was a desperate match to stop a few town boys from pursuing her, or whether their horoscopes were perfectly aligned, she doesn't know. But her brother had a great feeling about it, and the match was made.

They had no choice but to trust that their parents knew what they were doing, and they went with it. They were thrown into a relationship, their first and only one, and slowly learned everything about that person -- raw and true -- from the beginning.

They grew together because it was new and awkward and special for both of them. And no matter what came their way -- scraping for dowries, moving countries, a heart attack, the death of a child -- they stayed together and they dealt with it. They didn't even know that it could be any other way. I think there's a beauty to that.

Indian parents aren't the best at expressing love, in my experience. They don't think the words are necessary when you support each other for ... well, forever. But over the past few years, my parents have individually divulged their fondness for one another to me. And maybe because I'm older now, I catch them looking adoringly at each other in the temple. Stealing smiles in the kitchen. One discreetly stroking the other's head.

My father doesn't like talking about his feelings, but a year ago, he told me my mother is his favorite person. When we tease him about their age difference, he says he likes taking care of her. He thinks she's innocent, has a good heart and deserves to be taken care of.

My mother says she and my father are 99% made for each other. They are on the same page for all the things that matter. They are opposites in many ways. She doesn't share his love for cricket or Hollywood, and he doesn't engage in her discussions of Tamil literature. But they are perfectly complementary.

Often my mother jokes and tells me even if she searches the heavens and Earth, she can't find a husband as great as hers for me.

If that isn't love, I don't know what is.

CNN invited readers to share their stories of true love for Valentine's Day. See more and share yours at CNN.com/soulmatestories. Supraja Seshadri is a graduate of the Medill School of Journalism and works at a technology startup in the Bay Area. Her parents are eager for her to find a husband.