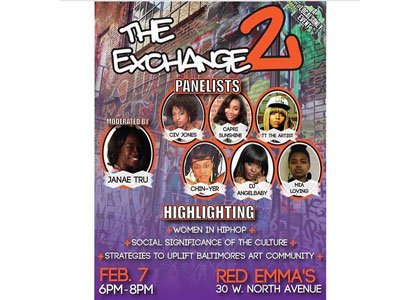 As we reflect about the past during Black History Month it is also important to pay attention to issues that should be addressed in our community today.

On Saturday, February 7, 2015, a group of black women got together to discuss the role of “Women in Hip-Hop, the Social Significance of Hip-Hop," as well as highlighting the Baltimore Hip-Hop scene at Red Emma’s Bookstore in Charles Village in North Baltimore.

Presented by Capri Sunshine and hosted by media personality Janae Tru (BackSeat Freestyle), the panel was made up of some of the most respected and independent women involved in music and culture in Baltimore, including: Mia Jones (educator/promoter); Civ Jones (radio personality); DJ Angel Baby (radio co-host & deejay); Chin-Yer (executive director at Baltimore Crown Awards and founder/director at The Baltimore Scene) and TT the Artist (educator/artist/performer).

The discussion was both educational and spirited. The discussion took a look at how women are viewed in hip-hop no matter their roles, as well as a comprehensive view of women and how they are perceived in the media, their struggles and accomplishments. Each person on the panel was very passionate and spoke from the heart regarding women and hip-hop. The audience was able to ask the panel questions.

The main goal of the event was to show solidarity between women in the music business and to start a conversation about they can bring to the changing industry.