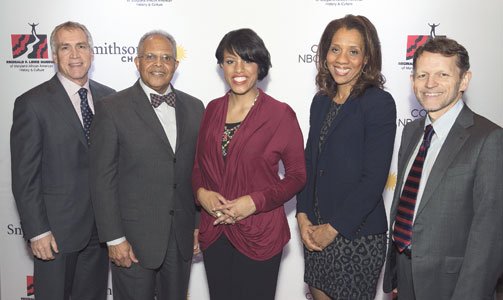 BALTIMORE — Comcast and Smithsonian Channel have partnered on the first sneak preview screening of a new documentary, “Legend of Lead Belly,” which profiles one of the most influential musicians of the 20th Century. Guests including Mayor Stephanie Rawlings-Blake, Baltimore City Councilman Carl Stokes and leaders of Baltimore's arts community attended the special Black History Month presentation on Thursday, February 5, 2015 at the Reginald F. Lewis Museum of Maryland African American History and Culture, a Smithsonian-affiliated museum.

Huddie Ledbetter, better known as Lead Belly, was born in 1889, into a post-war South plagued by extreme poverty, poor education, racism and a corrupt justice system. With the odds stacked against him, Lead Belly emerged as one of the most influential musicians of the 20th century.

“Baltimore has a rich history of African American contributions to music and the arts,” said Mayor Rawlings-Blake. “Thank you to Comcast and Smithsonian Channel for sharing the legacy of such an influential musician as we begin our celebration of Black History Month.”

The screening of the 46-minute film was followed by a panel discussion featuring Jeff Place, archivist with Smithsonian Folkways. Place is one of the chief architects of 'Lead Belly: The Smithsonian Folkways Collection'— the first in-depth, career-spanning box set of songs, photos, and essays dedicated to one of America's most treasured 20th-century icons.

Lead Belly has inspired generations of musicians, from The Weavers to the Grateful Dead, The Beach Boys and even Nirvana. And yet few people today know his remarkable story and even fewer know when they are listening to his music. His story is told in the new one-hour Smithsonian Channel special, Legend of Lead Belly, premiering Monday, February 23, 2015 at 8 p.m.

To find out more, visit: www.smithsonianchannel.com.