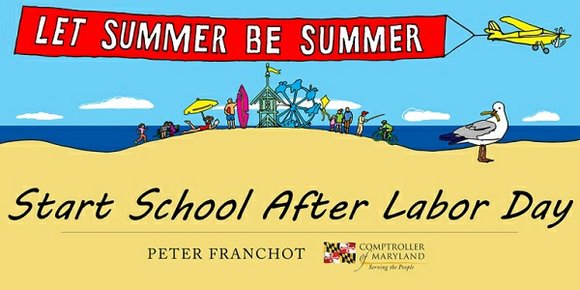 Building on the overwhelming success of his “Let Summer Be Summer” petition drive, Comptroller Peter Franchot is now asking Marylanders to submit videos describing what starting school after Labor Day would mean to them and their families.

“I would like to hear from citizens from across our great state and share those video testimonials with lawmakers,” Comptroller Franchot said. “The more than 13,240 Marylanders who signed the petition have made it clear they support starting school after Labor Day to give families, students, teachers and small businesses the break they need, and deserve. It gives students time to learn life lessons beyond the classroom, teachers time to recharge their batteries and small businesses a much needed boost during tough economic times.”

Any videos exceeding the 25MB limit of Gmail must be posted online on YouTube or Vimeo and the web address (URL) provided.

*The videos should not exceed two minutes in length.

*Please include your name, address and email.

Last month at a press conference in Annapolis, Comptroller Franchot along with Governor Larry Hogan, Ocean City Mayor Richard W. Meehan, state Senator James N. Mathias Jr. and other elected officials announced the results of the “Let Summer Be Summer” petition drive. With overwhelming support from every corner of the state, more than 13,240 people signed the petition. Gov. Hogan also added his name to the signatures and fondly recalled spending Labor Day weekend working in Ocean City before heading back to the classroom.

Last August, the campaign kicked off on the Ocean City Boardwalk and Deep Creek Lake. The list of supporters, which continues to grow, has been presented to members of the General

Assembly. The grassroots, citizen-led “Let Summer Be Summer” petition campaign came on the heels of a May 2014 governor’s task force recommendation that the state’s public schools delay opening until after Labor Day. The state task force met for nearly a year and voted 11 to 4 to embrace a later start date and extend summer vacation statewide.