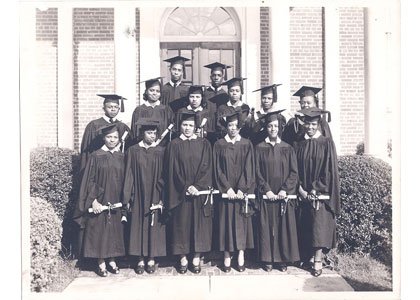 On January 9, 1865, the Baltimore Association for the Moral and Educational Improvement of Colored People opened one of Baltimore City’s first free schools for blacks in the African Baptist Church in Crane’s Building on the corner of Calvert and Saratoga Streets. Bowie State University (BSU) evolved from that early school teaching the elements of education into a comprehensive, diverse university preparing students for a changing world. The university officially launched a year-long celebration of the 150th anniversary of its founding at Reginald F. Lewis Museum of Maryland African American History & Culture in January. Above: BSU's first graduating four-year class from 1941. (Photo: Courtesy Bowie State University)

When the 40 African American founders opened what was then called the Baltimore Normal School on January 9, 1865, their mission was to establish educational facilities across Maryland that would help educate the more than 85,000 newly emancipated slaves.

The faculty of the Maryland Normal and Industrial School at Bowie in 1912.

Today, the school now famously known as Bowie State University counts among the many proud historical black college and universities in the country. It has become an acclaimed, comprehensive liberal arts school now in the midst of a yearlong celebration of its 150th anniversary.

“I have spoken with those who used to walk the railroad tracks to Old Bowie Town to the local store. This year I rode in a parade through one of the malls in the Bowie community and waved to people of many nationalities proudly wearing BSU paraphernalia. It was an awesome display of unity among Bowie State University and the community,” said Clarence Mollock, a 1972 graduate of BSU and president of the Baltimore chapter of the BSU National Alumni Association.

“During the 1970’s I was one of the student representatives on the Commission for Campus Development as well as the Commission for Acquisition of Land for Bowie State College. Since that time I am humbled to see the growth of the University,” said Mollock, who earned election in 2014 to the BSU Sports Hall of Fame. “I often bring back alumni so that they can see their influence over the years that Bowie State University has been in existence.”

Cassandra Robinson, a co-chair for BSU’s sesquicentennial steering committee and the school’s director of university relations and marketing, said the anniversary is naturally a special time for those associated with BSU as well as the community at-large.

“The celebration of the anniversary marks the significant impact that this institution has had in lives of so many Maryland citizens since its founding in 1865,” Robinson said. “We have a proud legacy that began in Baltimore as a school providing basic educational opportunities for newly emancipated citizens. It evolved into a normal school and teachers college producing teachers and administrators for schools throughout the state.”

Today, BSU stands as a quality and comprehensive university that attracts a diverse population of students to its broad array of programs that prepare them to be dynamic leaders who make a difference in the world, according to Robinson.

Robinson says the anniversary provides a platform to engage individuals who may not know much about BSU and to showcase a continuing commitment to serve students seeking opportunity and the needs of our surrounding community.

Recently, to help kick-off the yearlong celebration, school officials invited Beatrice Payne, who graduated from BSU more than 80 years ago, to reflect on the role BSU played in her life and career as an educator.

“I just thought teaching was the grandest thing, and that was what I was going to do,” said Payne, who at 105 is the University’s oldest living graduate.

“Going to Bowie influenced me from when I began teaching until ending,” she said in a prepared statement. “And, when I got out of the classroom and into administration, there were still things that were very helpful to me.”