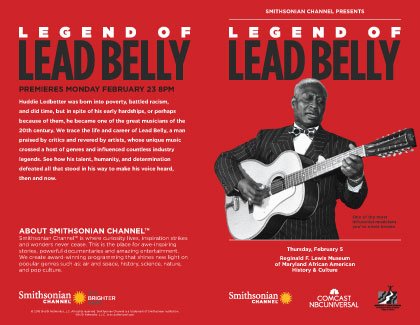 BALTIMORE — On Thursday February 5, 2015, Comcast and Smithsonian Channel hosted a private screening of “Legend of Lead Belly” at the Reginald F. Lewis Museum, which will premiere on the Smithsonian Channel, Monday, February 23, 2015 at 8 p.m. ET/PT.

With so much emphasis on music, it is only right that people, especially today’s youth, understand the past in order to move forward in music. Before hip-hop there was folk music. Folk music dealt with what was really happening in life, with the community, and with social issues. Lead Belly is an icon in music and as the film brings out there are many artists of today who were influenced by Lead Belly.

The film appropriately gives Lead Belly his just due. It details his life from how he was discovered to how he survived in this business. The film also details how his family is preserving his legacy. Make sure to carve out time to see what should become a classic for Black History Month and music. Check The Baltimore Times Facebook page to see the trailer of “Legend of Lead Belly.”