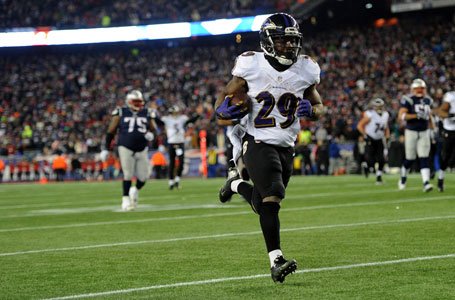 Baltimore Ravens running back Justin Forsett runs for a touchdown in the third quarter of the 2015 AFC Divisional Playoffs game against the New England Patriots at Gillette Stadium in Foxboro, Massachusetts on January 10, 2015. (Courtesy Photo/www.baltimoreravens.com)

BALTIMORE — To say that this past year has been a whirlwind for Baltimore Ravens running back Justin Forsett would be an understatement. He has gone from journeyman to NFL league leader in yards per carry. Forsett had the most productive season of his career last year. He is proof that sometimes all a player needs is a chance.

The Ravens will have to make a decision on what they are going to do with Forsett. He is set to become a free agent.

Justin Forsett has made it clear that he would like to remain with the Ravens. He says that he wants to get out of the “friends zone” and get into a long term commitment with the team.

Former offensive coordinator Gary Kubiak has gone on to become the head coach of the Denver Broncos. Marc Trestman is now the coordinator and has said that he will utilize similar concepts in the running game. The Ravens are still an ideal match for Forsett.

This was admittedly the last stop for Forsett who said, “I had one more shot. This could have been my last shot at being able to show what I can do.”

He took full advantage of the opportunity and posted 1,266 yards rushing. That was easily his highest rushing total in his career.

There are some running backs that could help the Ravens in the draft but retaining Forsett would be the best option for the team. He has already started to plant his roots in the city. Forsett has taken part in numerous community service projects with the Ravens. He spent time at Cancer Center at Johns Hopkins University hospital. That experience touched him.

“This is what it’s all about. What I do on Sundays is one thing but I believe I was put on earth for something bigger than football.” Forsett said. “Just to be able to give back, be a servant, to help others and give them encouragement, to out a smile on somebody’s face— it’s a blessing to me. This kind of work was instilled in me. The principles based [on] the Bible, my father always taught us to love our neighbors as we love ourselves. This is a part of it. To be able to help out the kids, be there for them, to take pictures with them, it’s such a blessing.”

Forsett had to make a hospital visit of his own on Valentine’s Day. He and his wife where going to go see Lauryn Hill perform her latest music. Forsett was concerned that going to be forced to deliver his son in the car. Fortunately, they did make it to the hospital in time for their son, Zion.

The off-season will be an interesting one for Forsett and the Ravens. He could draw some interest from the Broncos now that Kubiak is there and they will run the same system that was in place. The Ravens could go in a different direction in the draft or they could sign another veteran running back if they chose to.

Bernard Pierce and second year player Lorenzo Taliaferro remain on the roster also. Forsett averaged 5.4 yards per carry while Pierce averaged 3.9 yards and Taliaferro averaged 4.3 yards. They all ran behind the same offensive line. As the saying goes, “If it’s not broke, don’t try to fix it.”

The Ravens had the eighth ranked rushing offense in the NFL with Forsett as the feature back. There is no good reason why he shouldn’t return next season.