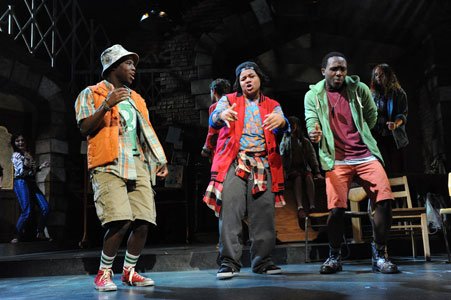 The Black Theatre play, “The Me Nobody Knows,” is a part of a special Black History Month symposium at the Clarice Smith Performing Arts Center at the University of Maryland in College Park on Saturday, February 28, 2015. (Photo: Stan Barouh)

Like megastars Sidney Poitier, the late Ossie Davis and Ruby Dee, a host of African-American film stars have also mastered the black theater.

And, as the black theater struggles with some even labeling it an endangered species, the Clarice Smith Performing Arts Center in College Park, Maryland will cap Black History Month on Saturday, February 28, 2015 with an introspective symposium beginning at 9 a.m.

The event, titled “The Black Theatre Symposium,” explores the expansion of an inclusive presence and influence in the field of theater.

Produced by the University of Maryland’s School of Theatre, Dance and Performance Studies, the symposium encourages participants to ask questions about the influence and future of black theater including; “How do we facilitate inclusion and diversity in the technical and administrative aspects of the field? And, how can black performers expand their artistry and marketability?”

“Theater professionals, scholars and students will convene to discuss and take action around these questions as we explore the expansion of an inclusive presence and influence in the field of theater,” said Sarah K. Snyder, a theater spokesperson.

Scott’s play counts as a compilation of memorable moments, events and images that recall a life in professional theater in a time far different than today. The stories are told from Scott’s artistic perspective as a black woman and veteran theater director, writer and actress who has worked in regional, off-Broadway and Broadway theater for nearly 50 years.

“The School of Theatre, Dance, and Performance Studies and the African Continuum Theatre Company joins forces at the University of Maryland with support of the College of Arts and Humanities to present the second annual Black Theatre Symposium,” said Leigh Wilson Smiley, the director of the School of Theatre, Dance and Performance Studies. “This day offers a chance to delve deeply into the historical, present, and future significance and development of the unique cultural heritage of the black theater in this region and this nation.”

In a published interview in 2014, Sade Lythcott, the CEO of the National Black Theatre (NBT), called black theater companies “an endangered species” and expressed concern that unless drastic measures are taken, companies like NBT may not be in existence 45 years from now.

That followed news of Minnesota’s famed Penumbra, one of the most critically acclaimed black theater companies in the country, announcing it was closing its doors and later, the Kuntu Repertory Theatre in Pittsburgh also closed.

The symposium at the University of Maryland will be geared toward awareness and the strengthening of the black theater, officials said.

“Last year we examined how black theater fits into the framework of our nation’s history and culture. We challenged assumptions about the boundaries of race and engaged in a spirited dialogue about the past, present and future of black theater,” said Scot Reese, a professor in the School of Theatre, Dance and Performance Studies. “This year, we are examining which institutions are successfully cultivating black theater practitioners. We will explore ways to facilitate inclusion and diversity in the technical and administrative aspects of the field and how black performers expand their artistry and marketability.”

Theater professionals, scholars and students also will convene to discuss and take action around the presented questions, the professor said.

“We will explore the expansion of an inclusive presence and influence in the field of theater,” Reese said.