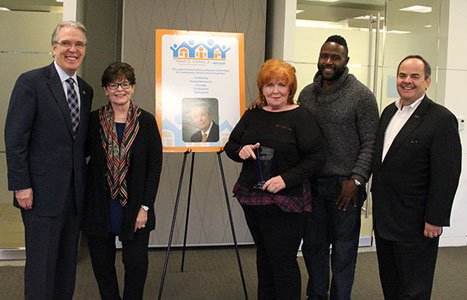 Christine Thomas enjoys talking about children. The Coldwell Banker Residential Brokerage real estate agent has two daughters, but there are many more Baltimore area children that she helps to nurture.

So, it wasn’t much of a surprise to those who know her when Thomas received the Adam D. Cockey Jr., Community Leadership Award from MRIS, the local multiple listings service, for her dedication to the area.

And, it certainly wasn’t a surprise when she teamed with former NFL safety Keion Carpenter to establish the Shutdown Academy, a development program for children designed to strengthen and help them reach their potential through mentoring and other programs in the classroom and on the athletic field.

“I saw a news clip about a local football team that was trying to raise enough funds to make it to the national championships in Florida and I went to meet with the coaches to develop a business and fundraising plan and found out they had $200 in the bank at the time,” Thomas said. “After meeting the kids I was determined to help make this happen. Eight of them had never been out of Baltimore, five had never been out of Maryland, and not one of them had ever been to a beach.”

In less than a week, Thomas says she raised $32,000 and she received donated sports supplies from Under Armour. She also negotiated the rates for the bus, hotel, food, and arranged for a tutor to accompany the group so the students wouldn’t be behind on class work.

What followed was a relationship with Carpenter and local football leagues dedicated to children from inner cities and other neighborhoods, providing them with educational, career and sports opportunities.

“It has never been about football,” Thomas said. “That is just the bait.”

Carpenter, who played eight years in the NFL with the Atlanta Falcons and the Buffalo Bills says he has been using the platform to reach out to young people. He says he ultimately wants to see a complete improvement in Baltimore and other inner-city communities.

“For me, it began about five years ago. My mentor, [former NFL All-Pro] Deion Sanders provided me with an opportunity to take some kids out of Baltimore City to Atlanta to play in a youth football tournament against a team from Texas,” said Carpenter, who played high school football at Woodland High School and college football at Virginia Tech before signing with the Bills before the 1999 season.

“Deion gave me the opportunity to start and I bought 200 children to Atlanta and we took them to Georgia Tech and we’ve been doing it every year,” Carpenter said. “We’ve added mentoring, tutoring, cheerleading, softball, baseball and lacrosse and we’re trying to have a full service after school program to keep the kids safe and off the streets.”

Shutdown Academy’s goal is to create a rich, dynamic learning environment with unique educational opportunities for school-age students, according to Carpenter, 37, a Baltimore native who has four children of his own.

He said the program is comprehensive and goes beyond the traditional classroom to cultivate essential life skills such as responsibility, self-discipline, and resilience.

Through classroom instruction, athletic training, and mentoring, the academy’s goal is to position students to be confident, successful advocates who will make positive contributions to our world.

“With our partnership with Dynamic Team Tutoring and For My Kidz, Inc., we holistically provide activities and opportunities to promote success for participants in the areas of academics, personal/social development, decision-making and college, career awareness and athletics,” Carpenter said, noting that the target population is students enrolled in select Baltimore County Public Schools in from first to twelfth grade.

It costs $200 to sign up and the program includes homework assistance, tutoring, sports training and participation and dinners. Mostly, it provides a foundation for a successful future, program officials said.

“There’s more to life than sports,” Thomas said. “It’s about teaching core values of honor, character, integrity and respect, and instilling in them a sense of community. It doesn’t stop when they leave program; the portion of them that will reach the NFL or the NBA is very small so we’re trying to teach our children to look past pro sports and to instill in them that there’s nothing wrong with being a team owner, a sports agent or even a janitor where there is pride in that.”

Many of the children in the program have never experienced going to a beach, museum or library.

For more information or to sign up for the Shutdown Academy, visit: www.shutdownacademy.org.