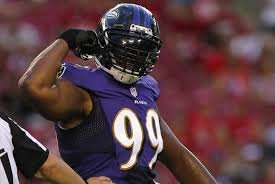 “I had a conversation with Chris this morning and thanked him for his contributions both on and off the field,” Newsome stated. “He represents the best of what a Ravens’ player is: committed on the field and a shining leader in the community. We thank him for everything he did for us the last two seasons. I know that Chris still wants to explore playing again, and he’s preparing to do that. We certainly would not close the door to Chris coming back to us.”

This past season, Canty played in 11 games (all starts), producing 33 tackles, a half-sack, two passes defensed and one forced fumble. He added two solo tackles in Baltimore’s two playoff games, one of which he started.

“We are a better franchise for having Chris Canty with us the last two years,” head coach John Harbaugh said. “He added maturity and leadership. Chris played well and played a lot of snaps for us, especially last season. He was an outstanding contributor to our playoff season in 2014.

“When we were handling serious off-the-field issues last season, Chris stood out internally with our team and represented us externally in the only way you expect from Chris – with intelligence and in a first-class manner.”

Below is a statement from Canty:

“First thing I want to do is thank Steve Bisciotti, Ozzie and coach ‘Harbs’ for bringing me to Baltimore and allowing me to wear the purple and black,” Canty stated. “I am very proud to be a Raven. They are a great franchise, and I was privileged to be a contributor to that outstanding tradition of defense that is part of the team’s lore.

“I love the coaching staff there, including the defensive staff. Dean [Pees], my line coach Clarence Brooks, Ted [Monachino] – really, all of them. What can I say about my teammates on that side of the ball? [They are] special players and good people, like ‘Sizzle’ [Terrell Suggs] and Haloti [Ngata]. Thank you. They helped me re-discover and continue my passion for football, a game I respect and love.

“I also want to thank Ravens fans. They embraced me immediately, and I embraced them back. They were inspirational.

“I am going to continue to prepare to play again and will explore other possibilities to play the game I love.”