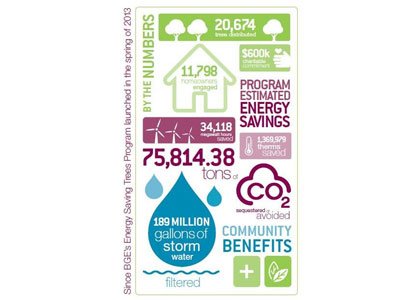 BALTIMORE — Many times the importance of trees during the winter-time is overlooked, however, trees provide energy savings for customers year-round and are essential for the health of the local ecosystem and the Chesapeake Bay watershed. Through the Baltimore Gas and Electric Company’s (BGE) annual BGE Energy Saving Trees Program the company is helping the City of Baltimore and its customers throughout central Maryland reduce their energy consumption and carbon footprints, while also making a positive impact on the environment. Through a commitment of $100,000, the company has teamed up with the Arbor Day Foundation and Davey Institute to provide 360 trees that have been planted throughout Baltimore City in neighborhoods where the City has plans to increase the tree canopy.

Heating and cooling typically account for nearly half of a home’s annual energy use and studies have shown that planting the right tree, in the right place, can help customers save up to 30 percent on their energy use throughout the year.

“BGE is pleased to team up with Baltimore City to enhance and improve the communities we serve,” said Valencia McClure, director of communications and corporate relations for BGE. “In addition to supporting efforts to improve energy efficiency, this tree planting project will have a positive impact on the environmental and aesthetic qualities in communities that suffer from excessive vacancy and bare lots.”

The Baltimore City neighborhoods of Harlem Park and Sandtown received 150 trees each, which were planted during community tree planting events on November 15 and December 6, respectively. In addition, 60 additional trees were planted along streets within McElderry Park, along E. Monument Street and throughout the downtown and South Baltimore City. The greening of these areas will help to reduce a heat island effect in the summer, improve air quality, and mitigate storm water runoff year-round, helping to improve the health of the Chesapeake Bay watershed. The trees that were planted are all native species that have been shown to thrive as street trees in Baltimore. The species planted include Sugar Maple, Red Maple, Scarlet Oak, Honey Locust, Eastern Redbud, Hornbeam, Sweetgum, Zelkova, London Plane and the flowering Dogwood. The neighborhoods targeted were selected with Baltimore City Division of Forestry due to their low tree canopies. The tree planting projects were completed with volunteer support from BGE, Baltimore City, the Baltimore Tree Trust and the Downtown Partnership.

"Baltimore City is committed to increasing the tree canopy throughout the City, but especially in the neighborhoods that currently have fewer trees, to improve the air quality, shield homes from harsh winter winds and provide shade in the hot summer months," said Erik Dihle, Baltimore City Arborist. "We thank BGE for supporting the City in our efforts by providing 360 trees, which have been planted in several neighborhoods, all of which will benefit from the improved aesthetics and environmental enhancements. We look forward to continuing to work with BGE in the future as they provide meaningful investments in communities across Baltimore City."

BGE’s donation of 360 trees to Baltimore City is part of its larger annual BGE Energy Saving Trees Program. Over the past two years, through a commitment of $600,000, BGE has provided more than 20,600 free trees to nearly 12,000 customers throughout central Maryland.