Justin Tucker has been Mr. Consistency in football and his faith 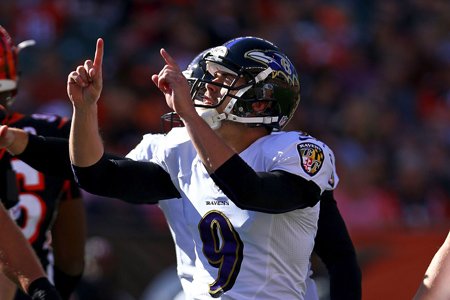 Justin Tucker would probably not be the name that the average fan would mention if they were asked who the leading scorer for the Baltimore Ravens was in 2014. They would be even more surprised if they were told that Tucker’s 127 points almost doubled the next closest player’s total (Torrey Smith 67 points). The Ravens place a major emphasis on special teams. This is because John Harbaugh has a background as a special teams coach prior to becoming the head coach of the Ravens.

Things have come full circle for the Ravens and Harbaugh now that they are set to face the New England Patriots in Foxboro for a fourth post season match up. The only loss that the Ravens suffered to the Patriots was in 2011 when Billy Cundiff missed a 32-yard field goal that would have tied the game. It cost the Ravens a shot at going to the Super Bowl. Harbaugh knew that he needed to get a reliable kicker if his Ravens wanted to get to the Super Bowl the following year.

Justin Tucker was brought in as an undrafted rookie free agent to compete with Cundiff. Tucker earned the starting job as the Ravens official place-kicker after an impressive showing in which he was very accurate when kicking field goals during the team’s preseason games. The Ravens released Cundiff in August of 2012. They ushered in the Justin Tucker era, which has been one of the most accurate and consistent in NFL history.

Tucker has been a top-flight kicker since his days at Westlake High School right outside of Austin, Texas. One of his high school teammates was Nick Foles, the quarterback for the Philadelphia Eagles. Tucker played in the U.S. Army All-American Bowl for high school football players. He then went to the University of Texas where he kicked a game- winning field goal which concluded a 118 game rivalry with the University Of Texas A&M.

Tucker does not hesitate to show his faith before he attempts to kick a field goal when he makes the sign of a cross.

“More than anything, it’s just to give glory and say thanks for the opportunity,” Tucker explained in a 2012 interview. “Not many people get to do what I do, only 32 guys get to do what I do. I’m just ever thankful for the opportunity whenever it presents itself. I really just ask more than anything that God’s will be done, and I’m happy with it.”

That faith was forged at a young age when he was in the fifth grade and he found out that one of his best friends died in a plane crash.

“That was my first experience really with the death of someone I was close to. A verse in the Bible mentions child-like faith and I really experienced it.” Tucker said. “I try to carry that same feeling with me every new day. In a sense, I’m thankful for my experiences through that. It’s really kind of an opportunity to grow in faith.”

Tucker has been the model of consistency as a kicker. He was named a first team All Pro by the AP and Pro Football Writers Association in 2013. He had the fourth longest streak in history with 33 consecutive field goals. Tucker has also been very accurate from 50 or more yards. He was the first rookie to make 50-plus yard field goals in two games. Tucker proved that the Ravens truly found a weapon when his 47-yard field goal was the game winner against the Denver Broncos in double overtime of a divisional playoff game during his rookie season.

He has also been very active in the community taking part in a number of events such as Lardarius Webb’s Celebrity Softball Game, Police Athletic League coat give away for homeless men at the Helping Up Mission and the Goodwill Gridiron Halloween party to benefit the Goodwill Industries. Tucker has become a fan favorite and a fixture in the community. It will be no surprise when the Ravens offer him a lucrative contract to remain in Baltimore for years to come.