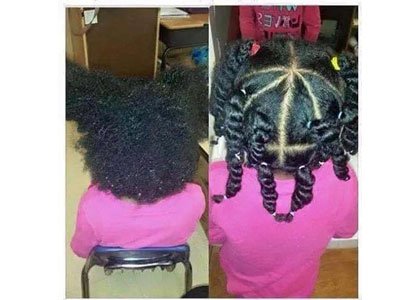 Blogger Vernessa Cole posted before and after photos of a little girl’s hair to illustrate a post about a teacher who became so distressed by the condition of a student’s unkempt appearance, she decided to comb, brush, remove lint and neatly braid the child’s hair.

Blogger Vernessa Cole posted before and after photos of a little girl’s hair to illustrate a post about a teacher who became so distressed by the condition of a student’s unkempt appearance, she decided to comb, brush, remove lint and neatly braid the child’s hair.

The teacher took before and after photos then shared them and her student's appreciative response online. The post went viral, drawing scores of comments both in support and against the teacher’s in school makeover.

Here is the post and photos (http://bit.ly/1xPyI3b) that created a firestorm of debate, along with a sampling of online comments. I think these remarks speak volumes about old and new school values. I recommend you pay special attention to the change in the child's demeanor when shown her new, neat, clean hairdo. I am still forming my opinion whether the teacher over-stepped any professional boundaries. However, I do think the I shall share insights from educational experts in next week’s column most compelling issue this post raises is whether there is link between academic success and good grooming? I plan to share insights from educational experts in next week’s column.

Cole writes: What would you do if your child came home with a hair style different from the one you sent them to school with?

Well a teacher recently took her student's hair into her own hands and posted a picture of the child before and after she styled her hair in the classroom. In the caption she explained that the little girl's hair looked like "it hadn’t been touched the entire holiday break." The photo is getting a mixed response. Read the entire post below.

“So one of my students came to school today with her hair full of knots, lint, and ridiculously tangled. It looked like it hadn’t been touched the entire holiday break…so my classroom became a salon. The photo on the left is before, and the right after. It just broke my heart so badly that I refused to let her leave school today the same way she came. When I finished she looked at herself and said “aww so pretty” … the beauty is that she is normally non-verbal. So now I’m crying lol. My day has been made!”

A sampling of social media comments:

•“I don’t see any problem with her hair in the [before] picture.”

•“Actually, it looks like there is lint in it. It is tangled and looks as though it needs to be washed”

•“I’d hope the teacher would be spending her time teaching, all this must have taken at least 40 minutes”

•“I can appreciate what the teacher did, but not with shaming a parent into better behavior on social media”

•“The teacher should have gotten permission before posting this online. This is dangerous!”

•“Dangerous??? That’s just silly. Teachers become caretakers, especially for the little ones. And teachers don’t need permission to do many of the things they do that’s in a student’s best interest and removes distractions from learning.”

•“I think the attention should be on why this child isn’t getting proper grooming at home, not condemning the person who helped her.”

•“OK, posting the photos may have been out of line. But, last time I checked teachers didn’t permission to care”

•“When you enroll your child in school most of the time parents sign a wavier giving permission for photographs to be taken of activities and other events during the term. As parents we give the school permission to care for our children’s health and wellness, which in my opinion includes the psychological, social and mental wellbeing. Making a student’s hair neat and presentable certainly seems to qualify for attending to a child’s emotional wellness.”

Here are my comments published on Facebook on the post: To me, the teacher’s actions are a perfect example of old school education. My late mother taught third grade at a school around the corner from our home. I remember her mending, washing and ironing clothes we outgrew and taking them to class on picture day, field trip and special assembly days. She put the clothes, along with a few of those small black dime store combs in a brown A&P supermarket sack. She’d bring the bag back home empty, neatly folded and store it away for next time. She never really talked about why she did this. But, as one who years later worked in school administration I think she recognized the connection between learning and the need for students to feel good about their appearance at school.

Jayne Matthews Hopson writes about educational matters because in the words of Epictetus, former slave and Greek Stoic philosopher, “only the educated are free.”