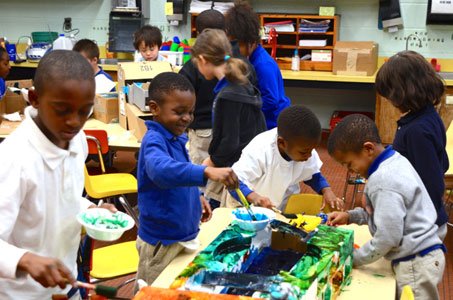 Former history teacher, Andrew Coy, founded the Digital Harbor Foundation and its Tech Center in Baltimore two years ago. The foundation, which is supported by grants, donations and gifts from government agencies, corporations, charitable foundations and individuals, fosters innovation, technological advancement and entrepreneurship by helping young individuals in Baltimore to develop digital skills through certain activities and tech workforce development. The center began with 25 students and today, more than 500 youth are taking advantage of the program. (Above) Youth from age six to 18 are able to participate in many different activities at the Digital Harbor Foundation Tech Center located on Light Street in Baltimore City. (Photo: Digital Harbor Foundation)

BALTIMORE — It was just a couple of short years ago when Andrew Coy taught history in the Baltimore School District. Today, two years after he left his teaching job and started a nonprofit after school program, Coy arguably is making more of a difference in the lives of local school students than he ever has.

“There used to be hundreds of recreation centers in Baltimore and now there isn’t, so I wanted to create opportunities for students and help them with skills and the ability to creatively solve problems that could lead to high-paying tech jobs,” Coy said. “So, I started a tech center to replace the [recreation] center.”

Coy works with a team of instructors at the center, which is located on Light Street in a former recreation center near Digital Harbor High School. The center began with about 25 students. Today, Coy said more than 500 are taking advantage of the program.

“We now estimate that we’ll be serving more than 2,500 kids at some point this year, so we’re seeing some real significant growth and we’re super excited about the things the kids are doing here,” Coy said.

The foundation, which is supported by grants, donations and gifts from government agencies, corporations, charitable foundations and individuals, fosters innovation, technological advancement, and entrepreneurship by helping young individuals in Baltimore to develop digital skills through certain activities and tech workforce development.

The tech center, which offers a variety of after school and summer camp programs for those ages six to 18, particularly underserved minorities and those traditionally underrepresented in the tech industry, is open to all and only requires a small donation that could be as little as $1 per month.

Coy also established the Center of Excellence for Innovation in Technology Education which was launched at the first ever White House Make Faire and counts as a cutting-edge program that provides a framework for empowering other educational organizations to deliver innovative technology education programs in their own locations.

“You donate what you can to attend,” Coy said. “All of our programs are pay-what-you- can. If what you can pay is $1 or $100, we love that because we’re able to serve a large socio-economic base and it maximizes everyone’s circumstance.”

Coy says each of the program’s recruitment activities target public school students, but even those not in schools are welcome.

“We go into schools and encourage students to apply. Our focus in terms of whom we’re targeting are public school students, though,” he said.

Coy says he is enjoying working with the students more than ever, particularly because the current generation of teens doesn’t want to be overlooked and they’re willing to work hard to achieve success. He believes an informal meeting space is powerful for the development of the workforce and it provides students an opportunity to dig deeper.

“When you want people in a creative industry such as the tech sector, you want somebody who can solve a problem that doesn’t yet have an answer. That skill set is severely underdeveloped in the current sort of educational system,” Coy said. “It’s not that the education system doesn’t want to develop it. It's just sort of the way policy and reality has combined.”

Now, Coy is connecting students with a multitude of opportunities, having dignitaries in government and the private sector visit his center, which celebrates its second anniversary on January 15, 2015.

“I feel like one of the things we have at Digital Harbor Foundation is an incredibly supportive programmatic team, all my staff and volunteers, as well as a very supportive board and the support team,” Coy said. “We ask a lot of commitment from our students as well. We’re asking them to commit to initially a semester, two to three days a week until 6 p.m. That’s sort of the commitment they have to make to us. The financial side of it is all just pay what you can, because we never want that to be a barrier.”

For more information or to enroll, visit www.digitalharbor.org.