‘Selma’ reaches both young and old 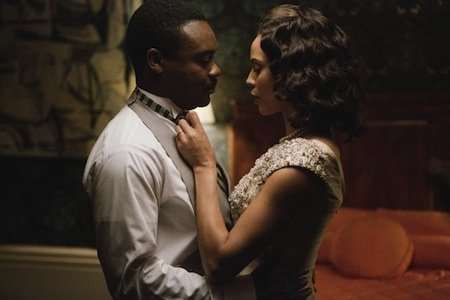 The civil rights film, “Selma,” which was produced by Oprah Winfrey has opened nationwide and while many have concluded that Oscar voters essentially snubbed the movie, it still received a Best Picture nomination from the academy, which will announce winners next month.

While critics and some historians have raised serious questions about the dialogue in the film between Martin Luther King Jr. and President Lyndon B. Johnson, “Selma” has become a hot talking point for African-Americans who lived during the tumultuous Civil Rights Era and young blacks who still know very little about King.

“The story is relevant and how you tell the story to young folks makes the difference,” said Baltimore resident George Arrington, 80.

A retired IRS employee, Arrington is familiar with civil rights protests. He led a sit in at a Woolworth store during his college days at Virginia State University.

“I’m a child of that era and I attended segregated schools,” he said. “I took my children and my grandchildren to see the ‘Selma’ movie because it’s important that everybody has an idea of our complete history.”

Directed by Ava DuVernay, “Selma” is based on the 1965 marches from Selma to Montgomery, Alabama. It delves into the many discussions between King and Johnson about civil rights and other concerns facing African-Americans and other minorities.

“It’s very moving. It is so real,” Lewis said. “It says something about the distance we’ve come in laying down the burden of race.”

Lewis, 74, who was among those to have taken part in those historic marches, said the film conveys the inner significance of the ongoing struggle for human dignity in America, which is one of the cornerstones of the nation’s identity.

“It breaks through our too-often bored and uninformed perception of our history, and it confronts us with the real human drama our nation struggled to face 50 years ago,” he said.

Meredith Hurston, a Baltimore resident and principal consultant for M Squared Health in nearby Brooklandville said the movie proved very timely. She said her mother was a Freedom Rider and “Selma” provided visuals to a story she had only heard about as a child growing up.

“It brought context to the church bombing with the four little girls. It depicted just how far white supremacists were willing to take their disdain for African-Americans and those in solidarity with them,” said Hurston, 39.

Matthew Lynch, the dean of the school of education, psychology and interdisciplinary studies and an associate professor of education at historically black Virginia Union University also saw the film and said the movement still matters today.

“I think it is one of the most important movies on the topic of the Civil Rights movement that has ever been created,” Lynch said. “The movement seemed so far removed from the students in our classrooms today. Their parents weren’t even alive when all of it took place so it’s important to bring it to life again through something like a movie that I believe will be a powerful teaching tool for years to come.”

Actor, hip-hop star and playwright Jaron Marquis Garrett said the film made him appreciate the shared struggle faced today by blacks in the wake of the deaths of Ferguson, Missouri teenager Michael Brown, Florida teenager Trayvon Martin and Eric Garner of New York.

“It is our duty and purpose to fight for the life and dignity of humanity,” said Garrett, 31, president and CEO of Dreamapolis, which works to help urban entrepreneurs start businesses by connecting them with critical tools and resources.

“The blood and tears of our fathers and mothers have stained this earth for us to walk proudly upon it,” Garrett said. “For us to live a life that is anything less than great is to do our ancestors over the past 500 years a great dishonor.”