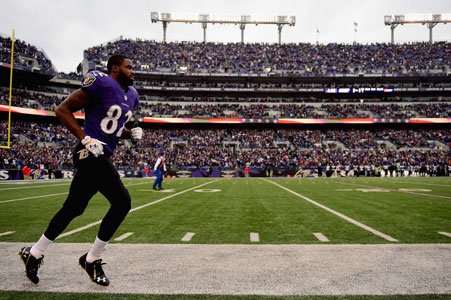 Baltimore Ravens wide receiver Torrey Smith takes the field prior to the game against the Jacksonville Jaguars on December 14, 2014 at M&T Bank Stadium in Baltimore. (Photo: Baltimoreravens.com)

BALTIMORE — The Baltimore Ravens are getting ready to move into the off-season and have some decisions to make regarding free agents. Wide receiver Torrey Smith could command a nice salary if he hits the open market. He is set to become an unrestricted free agent. He is firmly entrenched in the Baltimore community and has made it no secret that he wants to stay. A big decision will have to be made by the Ravens front office.

Torrey Smith has done a lot of work in the Baltimore area. His foundation, the Torrey Smith Foundation has funded the construction of multiple reading rooms, which he calls a “reading oasis” for local high schools. Smith has done a lot during the holidays as well. He provided a Thanksgiving dinner for multiple families and spent time with elementary school students before Christmas.

The Smith family is deeply rooted in the Baltimore area. His wife Chanel Smith says that Baltimore is home for their young family. She was a star hurdler for the University of Maryland track team while Torrey was a star football player there. This has been their home ever since.

Smith says that he would rather not go into free agency and that he wants to get a deal done.

“If I had my way, obviously, I'd like to get something done beforehand so I can stay here. It’s a horrible feeling knowing that it’s a possibility that I might not be here next year. I understand it's a business and nothing is guaranteed.” Smith said. "It’s kind of like home now. It's kind of tough to leave home at times. I genuinely love the people here, from the owner to everyone who makes this building go. I really love being here."

According to Joel Corry, an NFL salary cap expert for CBS Sports and the National Football Post, Torrey Smith needed to convince teams that he is a number one receiver. He said that Smith needed to prove that he can be the primary option consistently but will be a very desirable player if he hits free agency. Corry said Smith can expect to be paid like a high second receiver in the neighborhood of $6 million per year.

Ravens head coach John Harbaugh is a big fan of Torrey Smith and wants him back.

“I love Torrey. He’s been a huge part of what we’ve done since he got here. He’s been a great part of the community, all those things, he’s made a ton of plays for us.” Harbaugh said. “Personally, and I think I speak for everybody when I say that we like Torrey a lot. We’d like to have him back but we’ll just have to see how it plays out.”

Statistically, Smith didn’t have an outstanding year, posting 49 receptions for 767 yards. He did however score 11 touchdowns. Smith also drew more pass interference/illegal contact calls than any other receiver. This was a year that Smith was hoping to establish himself and set things up to get a big time contract.

One thing that bodes well for Smith is the fact that he didn’t sulk or complain to the media about not getting as many targets at the start of the year. That is a testament to his character. He is a team first guy and that showed when he tried to fight through a knee injury to help his team as they made a late playoff push. A lot of players wouldn’t be willing to risk further injury in contract year but Smith knows that “Playing like a Raven” means that the team comes first.

It’s safe to say that Smith will be back with the Ravens. They are fully aware of his value both on and off of the field. Community outreach is something that the Ravens place a lot of importance on and Torrey Smith surely does an outstanding job of being involved in the community. He is a fan favorite and if he has it his way, he will be a Raven for life.