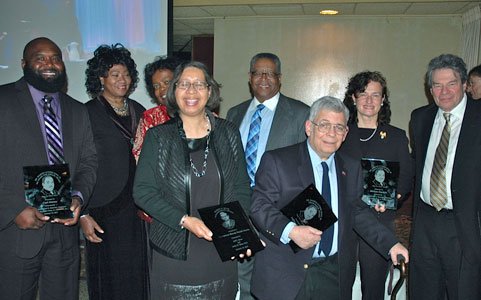 During his keynote address Carter recounted a story of moral leadership by the second African-American to graduate from the academy. In the closing days of the Vietnam War that graduate, Lawrence Chambers, was the captain of the aircraft carrier USS Midway. His ship was at sea when a Cessna low on fuel and piloted by an escaping South Vietnamese soldier with his family asked to land on the carrier. He made the decision to dump helicopters worth $10 million in the sea to make the successful landing possible.

At the time, Chambers had only been in command of the USS Midway for four weeks and believed that his order would get him court marshaled. He also called Major Buang-Ly the "bravest man I have ever met in my life" and said of his decision to allow Ly to land that "When a man has the courage to put his family in a plane and make a daring escape like that, you have to have the heart to let him in." Carter quoted Martin Luther King Jr. to illustrate Chambers moral leadership. “Everybody can be great.... You only need a heart full of grace. A soul generated by love.” Carter concluded, “King produced some of the greatest oratory in the history of our nation.”

Entertainment was provided by the Maryland Youth Symphony Orchestra, performing an orchestral arrangement of America by Ray Charles and an excerpt of Dvorak Symphony No. 9 "The New World" incorporating the spiritual Goin' Home. The Naval Academy Band played the National Anthem.

In 1988, then Alderman Carl O. Snowden founded the Dr. Martin Luther King Jr. Awards Dinner in Anne Arundel County. The dinner was designed to honor the legacy of Dr. King by honoring those who through their deeds, words and actions have helped to keep his legacy alive.