A beginning solution for Charleston 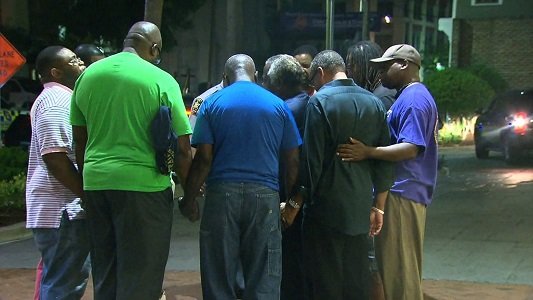 Police in Charleston, South Carolina, are at the scene of a shooting at a historic black church, a local lawmaker told CNN Wednesday, June 17, 2015 night.There was no immediate information on potential victims. The shooting took place at the Emanuel African Methodist Episcopal (AME) Church, said State Rep. Wendell G. Gilliard who represents the district where the church is locate (Photo: CNN)

The domestic terrorist attack at Emmanuel AME church killing nine black people should be an eye opener. Since blacks gained their freedom inclusive of a failed Radical Reconstruction that ended with the Tilden Hayes Agreement in 1877— domestic terrorist attacks have been an official license, both legal and illegal. They have been an indelible stain on America’s societal fabric that continues to touch and include more than an individual fiber. It is not just about Dylann Roof.

So now the individual has been caught should we sing “Kumbaya,” and lovingly come together to heal as the media has drummed in our heads over the last week or so as a cure for this terror? Yeah! Right!

violence and address the deep social ills of Charleston, you must believe in Santa Claus. Ho! Ho! Ho!

Will getting rid of all Confederate flags rid the United States of “Charleston-like” terrorist acts? To tell the truth, for me the flag symbolizes how most of the Confederate army, composed primarily of poor whites who fought in a war that lined the pockets of the large Bourbon plantation landowners. They served as fodder for a cause that kept them barely above the status of black slaves.

Okay, get rid of these flags if it helps ease your mind. I am with you. Please don’t hold your breath for it to do much of anything.

Historically, self-defense— yes, I said it— has proved its mettle as an effective

Resistance and the Civil Rights Movement” or Robert Williams’s “Negroes with Guns” or any of Malcolm’s speeches. If you want to go farther back in time, read David Krugler’s “1919, The Year of Racial Violence: How African Americans Fought Back.”

Charleston, just as important masks other oppressive conditions that blacks have historically faced. Quality of life social indicators and inequalities still put Charleston blacks at the bottom. Gentrification has forced blacks out of the downtown peninsula area to North Charleston. Oh, by the way, this is where a racist cop shot and killed Michael Scott.

because he thought that black people were taking over. Dylann, you possess the mindset of the Confederate soldier spoken about with a modern day twist.

Blacks are blamed because of affirmative action or because they take whites hard earned money from being on the dole. Blacks, the LGBTQ folks, and other scapegoats are supposed to

degrade the American way of life. The true culprit is the U.S. led economic crisis that drives more and more people down the economic and the quality of life social indices. Do you feel it?