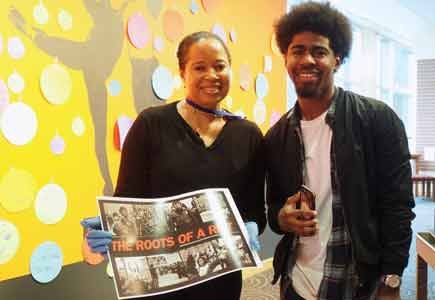 Baltimore photographer Devin Allen and Deborah Nobles-McDaniel, Registrar for the Reginald F. Lewis Museum. The 27-year old photographer graced the cover of Time Magazine in May this year, making him only the third amateur photographer to do so. His first solo show “Devin Allen: Awakenings, In a New Light,” will exhibit images of the 2015 Baltimore protests. The exhibit opens at the Reginald F. Lewis Museum on Friday, July 10 and runs until December 7, 2015. (Courtesy Photo/RFL)

BALTIMORE — “Devin Allen: Awakenings, In a New Light,” the first solo show of Baltimore photographer Devin Allen, exhibits images of the 2015 Baltimore protests and debuts a new community space inside the Reginald F. Lewis Museum called Lewis Now. The 27-year old photographer graced the cover of Time Magazine in May, making him only the third amateur photographer to do so. The images on view reveal diverse moments, showing both the struggle and humanity of protest, including from the side of law enforcement.

The exhibition is a historical moment for Allen and the museum as the photographer headlines the launch of Lewis Now, a new community space that provides a platform for community engagement. The exhibition is on view Friday, July 10 to Monday,

December 7, 2015 at the Reginald F. Lewis Museum located at 830 East Pratt Street in Baltimore City, and is sponsored by PNC Bank.

“Devin, through his poetic and compelling photographs, reveals the complexity of those days with the perspective of someone who grew up in West Baltimore. His part in helping to define the image of our city not only gives us a more holistic understanding of the protests, but the act of self-defining is important in an era where practices like racial profiling impose images upon African Americans and threaten to define their identity for them,” says Dr. Skipp Sanders, executive director of the museum. “The museum is proud to host his first solo show and to have it debut our Lewis Now space. His work corresponds perfectly to the idea behind Lewis Now, which is to provide the community with a free and public place to gather, converse, and exhibit content around issues and stories that are relevant to current times.”

A number of images have been enlarged to 20-feet wide, providing a boldly immersive visitor experience. They have been wheat pasted onto the wall by Allen, in a nod to the street origins of the images. Visitors can interact with the exhibit by writing responses to the prompt, ”Where were you?” on a timeline that shows a number of events Allen captured during his documentation of the protests.

“PNC and the Reginald F. Lewis Museum together will present an exhibition from Devin Allen that captures his extraordinary images of Baltimore residents during an emotional time for everyone to see," said Laura Gamble, PNC's regional President for Greater Maryland. “We hope our support of this powerful exhibition is another way to stimulate dialogue about how we can work together to move Baltimore forward.”

The new Lewis Now space is located on the ground floor of the museum and is free and open to the public. Allen can be followed on Instagram @bydvnlln.