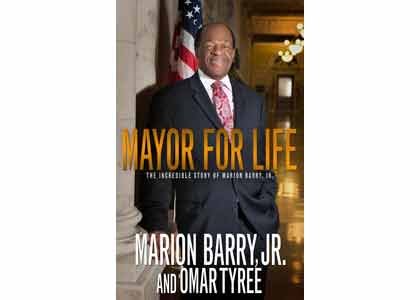 This week we review for you, “Mayor For Life The Incredible Story of Marion Barry, Jr.” written by Marion Barry Jr. and Omar Tyree. The four-time mayor of Washington, DC tells his shocking and courageous life story, beginning in the cotton fields in Mississippi, to the executive offices of one of the most powerful cities in the world. Known nationally as the disgraced mayor caught on camera smoking crack cocaine in a downtown hotel room with a mistress, Marion Barry Jr. has led a controversial career. This provocative, captivating narrative follows the Civil Rights activist, going back to his Mississippi roots, his Memphis upbringing, and his academic school days, up through his college years and move to Washington, DC, where he became actively involved in Civil Rights, community activism, and bold politics.

I find it incredibly courageous that Barry is brutally honest about who he is as a person, his personal mistakes and how it affected his life from a political and personal standpoint. No matter what one thinks about that one night that cost him plenty, you can’t take away the fact that Marion Barry Jr. is an icon and should be remembered for that. Blacks in the D.C area thrived under his three terms, so much so that the residents of the District voted him into a fourth term after the scandal and after the prison sentence. The people didn’t judge him on his personal issues but on his service for the city.

Marion Barry Jr. passed away on November 23, 2014. Since his passing, D.C. has continued to honor his legacy. A summer youth program that Marion Barry Jr. started has been renamed the Marion Barry Youth Leadership Institute and D.C. Mayor, Muriel Bowser, announced the formation of the D.C. Commission to Commemorate and Recognize the Honorable Marion S. Barry Jr.